India had themselves to be blamed on the field putting down three crucial chances that of Ashton Turner, who s game-changing 84 off 43, sealed a memorable four-wicket win for Australia against India in the fourth one-day international at Mohali on Sunday. (ALSO READ: Turner blasts 84* to power Australia’s record chase)

Chasing a mammoth 359 that came on the back of Shikhar Dhawan s career-best 143, Australia got off to the worst possible start in pursuit of 359 losing Aaron Finch for a duck and Shaun Marsh, who was castled by Jasprit Bumrah very early.

Peter Handscomb, who registered a maiden international ODI hundred and Usman Khawaja steadied the ship with a 192-run partnership for the third wicket to keep Australia ahead. The hosts bounced back removing Khawaja first and Glenn Maxwell in quick succession.

However, Turner, quite literally, turned the game around with a breath-taking knock as he tore India s best bowlers Bumrah and Bhuvneshwar Kumar apart to seal a record run-chase for Australia.

The wicket remained good throughout the game. It was very difficult to bowl in the end. Asthon’s innings was the game-changer. Last game, we were told there would be dew and we were at the wrong end. They played better cricket, they deserved to win, India captain Virat Kohli said at the post-match presentation ceremony. (ALSO READ: Peter Handscomb lauds pretty special Ashton Turner knock)

India included Yuzvendra Chahal for the first time in the series at the expense of allrounder Ravindra Jadeja. Quizzed if the move backfired, Kohli explained: We had to get the fifth bowler out of the way, so we wanted to get done with it first. It became too wet to bowl, it was very difficult to bowl in the right areas.

Kohli was livid with his team s fielding as Turned earned three lives en route his match-winning knock. Rishabh Pant was the first to miss a stumping chance in the 44th over off Chahal. Kedar Jadhav then failed to hold on to one at deep mid-wicket in the 47th over off Bhuvneshwar. Dhawan added to India s woes after he dropped a dolly at mid-off much to the dismay of Kohli. (ALSO READ: Shikhar Dhawan crosses 10,000 List A runs, becomes 11th Indian to reach the milestone)

Crucial, we were sloppy in the field and should’ve grabbed our chances. The opportunities slipped away and so was the game. It’s going to be cracker of a game, we’ve had two eye-openers in two games. We have to work hard and we got to come up with more intensity and passion in the next game, Kohli said.

The fifth and final ODI, now a decider, will be on March 13 at the Feroz Shah Kotla in New Delhi. 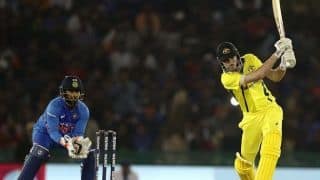