Peter Handscomb notched up his maiden ODI to set up Australia's thrilling win in the Mohali ODI.

Peter Handscomb, Usman Khawaja and Ashton Turner starred as Australia edged out India in a high-scoring encounter in Mohali on Sunday and levelled the five-match ODI series 2-2, with a game to spare.

However, Khawaja, who had scored his maiden ODI hundred in Ranchi, scored 91 and Handscomb notched up his first ODI ton and put up a 192-run partnership to help Australia surge their way back in to the match before Ashton Turner s quickfire 84 (not out) off 43 balls sealed a thrilling win for Australia.

Handscomb, reflecting on his and Khawaja s match-winning partnership, said: “It’s a lovely feeling. My role today was to take it as deep as possible and that hundred today is pretty special. Uzzie (Khawaja) and I don’t talk much in the middle. We leave each other to play their own games. We felt pretty quickly that this is a pretty good wicket and we can chase those runs down. There wasn’t the kind of spin that was there in the previous game. So it was really good for us that we could play our natural game. (India vs Australia, 4th ODI: SCORECARD)

The Australian middle-order batsman also lauded Glenn Maxwell for his 13-ball 23-run knock and taking pressure off him.

Maxi (Maxwell) played a beautiful role. It was a team thing… He comes out, takes pressure of me, strikes close to 200 and it was a critical innings. I panicked (smiles).

Handscomb was effusive in his praise for Turner, who helped Australia cross the finish line with 13 balls and four wickets to spare. Turner, who had made his ODI debut in the first ODI of the series in Hyderabad, was brought into the playing XI for the Mohali ODI following a thumb injury to Marcus Stoinis and that decision paid dividends.

We have seen what he (Turner) can do in the Big Bash. But to do something like that in your second ODI is pretty special and he can take a lot of confidence from that going forward, concluded Handscomb. 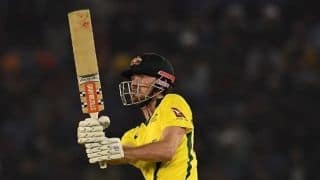