Virat Kohli made 67 and Kedar Jadhav 52 as India struggled to dominate Afghanistan.

SOUTHAMPTON: Their chances of reaching the ICC Cricket World Cup 2019 semi-finals long over, Afghanistan put in an authoritative effort in the field to restrict India to 224/8 in their 50 overs after Virat Kohli opted to bat on Saturday at The Rose Bowl.

The pitch was slow, the ball was sticking. Afghanistan found success from their quartet of spinners, including Rahmat Shah whose part-time legbreaks accounted for Vijay Shankar. Mujeeb ur Rahman got Rohit Sharma cheaply during a very restrictive start. Mohammad Nabi roared back into the tournament with the wickets of KL Rahul and Kohli. After his worst day in an Afghanistan jersey, in the last match with England, Rashid Khan wheeled through his ten overs to end with 1/38, crucially ending MS Dhoni‘s snail-paced innings in the 45th over and conceding one run in the 47th.

Kohli’s third half-century in a row – 67 off 63 balls – threatened to take India to a big total, but his dismissal sparked a period in which India’s batting might slowed. Dhoni made 28 off 52 balls, Kedar Jadhav hung around to get the score past 200 with 52 off 68 deliveries but this was decidedly Afghanistan’s innings. Chasing 225 will not be easy on this track and against India’s bowlers, yet Afghanistan should believe it is possible.

The law of averages caught up with Rohit, who was bowled for 1 off 10 deliveries when prodding forward to Mujeeb first ball of the fifth over. This made him the first spinner to dismiss an India batsman at this World Cup. And it was Rohit’s first bowled dismissal to an offspinner in ODIs since 2011.

India had not hit a boundary yet. Rahul hit two in the following over, the second skidding off the edge and past slip. Kohli was in better control of his two boundaries, hitting Aftab Alam past fine leg and into the offside with force. He then whipped Mujeeb past square leg for four more.

Rahul struggled to dominate Afghanistan’s spinners. He attempted to hit Mujeeb by stepping out and mishit the shot in the air just short of long-on. He edged past slip. He was forced to defend. Frustrated, he brought out a reverse-sweep to Nabi and was caught at short third man. Furious, Rahul hit his pads with the bat.

Kohli, on 31 from 23 balls at the time, moved to his half-century in 48. Hit driving was imperious, his running between the wickets quick and that ability to keep singles turning over simply too easy.

Afghanistan lost a review for lbw against Shankar in Rashid’s first over, but found success from surprising quarters. In his third over, Rahmat won an lbw shout from Aleem Dar, which Shankar reviewed after a quick word with Kohli. The appeal stood, and Shankar was on his way for 29 off 41 balls.

Not long afterwards, Nabi struck gold by getting Kohli for 67 when India’s skipper was undone by extra bounce and cut to Rahmat at cover. At 135/4 in the 31st over, India were in a bit of a jam.

Dhoni struggled to force the ball away and turned down singles with Jadhav. At one stage he was 14 from 30 balls. Jadhav broke out of the rut by whipping Rashid over midwicket for India’s first boundary in 65 balls. The mood perked, and the partnership grew. Alam was clattered for fours in the 43rd over by Jadhav and Dhoni. Rashid missed the stumps when both batsmen found themselves at the same end, but the error didn’t cost. Without a run added, Rashid had Dhoni stumped – for just the second time in 293 ODI innings – to give Afghanistan the breakthrough.

The first six of the innings, a one-handed shot from Jadhav, put 200 on the board. Rashid bowled a terrific 47th over to Jadhav, in which the only run came via a wide. The last three overs produced just 18 runs as Aftab had Hardik Pandya edging a smartly disguised slower bouncer and Naib dismissed Mohammed Shami and Jadhav. 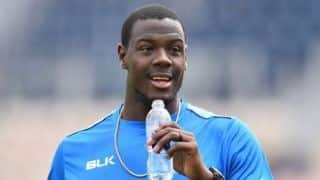