Shakib will become only the third Bangladesh player to play 200 or more ODIs, behind skipper Mashrafe Mortaza (210) and Mushfiqur Rahim (206).

That wicket made Shakib only the fifth player behind Sri Lanka‘s Sanath Jayasuriya, South African Jacques Kallis, and Pakistan pair Shahid Afridi and Abdul Razzaq to reach the landmark of 5,000 runs and 250 wickets in ODIs.

New Zealand, the 2015 edition s runners-up meanwhile, enter this match on the back of a crushing 10-wicket drubbing against Sri Lanka in their opening match.

The Kiwis showed against Sri Lanka that they are a well-rounded team more than capable of going a long way in the tournament. They did not miss pace spearhead Tim Southee (calf) and top-order batsman Henry Nicholls (hamstring) in their opening game.

Matt Henry, who replaced Southee, took three wickets in Sri Lanka’s 136 all out, while openers Colin Munro and Martin Guptill knocked off the 137 required in just 16.1 overs.

Shakib has experience of upsetting the Black Caps after inspiring their five-wicket win over New Zealand in the 2017 Champions Trophy with the most recent of his seven ODI hundreds. He will become only the third Bangladesh player to play 200 or more ODIs, behind skipper Mashrafe Mortaza (210) and Mushfiqur Rahim (206).

Will Bangladesh make Shakib s 200th ODI a memorable won or will New Zealand continue to crush every team in it s path. Let s wait and watch!

Weather: Cloudy skies with a maximum temperature of 19 degrees Celsius

You can also follow LIVE coverage of the match on CricketCountry (SCORECARD: Bangladesh vs New Zealand)

Having begun on a winning note, Bangladesh will not want to tinker with their combination and will look to go ahead with the same XI.

New Zealand did not miss pace spearhead Tim Southee, recuperating from a calf injury and top-order batsman Henry Nicholls (hamstring) in their opening game. Matt Henry, who replaced Southee, took three wickets in Sri Lanka’s 136 all out, while openers Colin Munro and Martin Guptill knocked off the 137 required in just 16.1 overs.

“We are up for the challenge but at the same time we are relaxed. We knew we had the skill to beat big teams. I think that we are in a good place, mentally. I think if we can continue in this manner, we can go a long way in the tournament.” Shakib Al Hasan

In England we can expect different kinds of wickets. In the warm-up games we saw all kinds of attacks and wickets, so it is important to have a balanced attack for these wickets. Kane Williamson 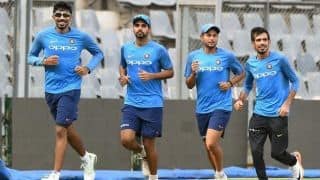 Cricket World Cup 2019: Judge this Indian bowling attack with rivals of this generation only: Sachin Tendulkar