James Anderson has suggested that Stokes asked the umpires to overturn their decision.

James Anderson has suggested that Ben Stokes, Man of the Match in England‘s historic first World Cup title win, requested the on-field umpires to take away the boundary that was awarded to him and the total after a throw from the deep ricocheted off his bat and went to the boundary.

During Sunday’s riveting World Cup final between England and New Zealand at Lord’s, Stokes scored 84 not out during the home team’s 50 overs, and then in the Super Over after the game ended in a tie, he and Jos buttler took 15 off Trent Boult. New Zealand levelled the scores, but Eoin Morgan’s team was named World Cup winners on a boundary count.

While the criteria to decide the winner remains a contentious point, before that came the most pivotal moment in the final. In the final over of regular play at Lord’s, with England needing nine runs from three balls, Stokes turned back for a second after whipping the ball to deep midwicket and as he neared his crease he was forced to put in a dive. The throw from Martin Guptill hit Stokes’ bat and deflected to the boundary.

England were awarded six runs but later the former umpire Simon Taufel, who is part of the MCC’s laws sub-committee, said they should only have got five as the batsmen had not crossed for their second run when the throw was made.

“The etiquette in cricket is if the ball is thrown at the stumps and it hits you and goes into a gap in the field you don’t run,” he said. “But if it goes to the boundary, in the rules it’s four and you can’t do anything about it. I think, talking to Michael Vaughan who saw him after the game, Ben Stokes actually went to the umpires and said, ‘Can you take that four runs off. We don’t want it.’

“But it’s in the rules and that’s the way it is – it’s been talked about for a while among the players, potentially being a dead ball if it does hit the batsman and veer off somewhere.”

(READ: We’ve got the trophy and we intend to keep it: ECB chief Ashley Giles)

Reactions to England’s win over New Zealand have widely criticised the ICC’s ruling for a Super Over in a World Cup final, with many opining that the trophy should have been shared or given to Kane Williamson’s team on the basis of them having lost fewer wickets.

New Zealand coach Gary Stead said that the ICC needed to review its rules after a “hollow” final, and Williamson echoed those sentiments. 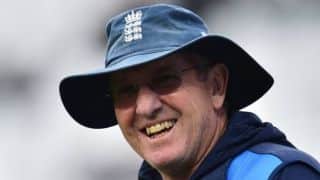