Former Sri Lanka skipper Mahela Jayawardene has declined to play a role in Sri Lanka’s World Cup campaign, saying he is disillusioned with the general state of the sport in the island nation.

“I was (invited) but I have several other commitments. More than that, I didn’t understand the role I am expected to play,” Jayawardene was quoted by ESPNcricinfo as telling to the Sunday Times.

“There’s no point in me getting involved tactically, or whatever, if I don’t have a say in the whole structure. The team is selected and everything is done and dusted. There is no room for me to come in and add something.

“I am still happy to contribute in my little way with the management of the team, but nothing to do with the SLC. That’s something I have told myself as well. I just don’t have the appetite to come and work for anybody when I know that it’s not the right place for me.” (ALSO READ: Sri Lanka s cricket has gone backwards: Mahela Jayawardene)

Last year, a committee featuring Jayawardene, Kumar Sangakkara and Aravinda de Silva had also submitted a report on Sri Lankan cricket, only to be ignored.

“We created a professional cricketing structure spending eight months,” he said. “We offered to set it up for them but they rejected it. We did it because we don’t want to lose our cricketers going to Australia and to league cricket in England. We need those experienced players in our system.

“There are some teams in our first class system where the average age is 25, which is sad. When we played, we had so many senior cricketers to guide us. Without them in our system, we cannot build a strong domestic cricket structure. And without doing that, there’s no point in building stadiums.”

Jayawardene also came down heavily on the leadership of Angelo Mathews and Dinesh Chandimal, saying some of their decisions were responsible for the chopping in changing in captaincy.

Since Jayawardene retired in 2015 and Mathews took over, Chandimal, Thisara Perera, Lasith Malinga, Chamara Kapugedara and – most-recently – Dimuth Karunaratne have held the reins.

“The only advice (Kumar and I) gave Angelo was not to give in to cricket politics,” Jayawardene said. (ALSO READ: Mahela Jayawardene, Muttiah Muralitharan lash out on Sri Lanka selectors)

“He needs to be a stronger leader, to be with the players and do the right thing. But he gave in to cricket politics. He allowed other people to make decisions and did not stand up for his players. I am being honest. I have told him this as well and he accepts it. If he hadn’t give in, we would probably not be in this situation today. Even if I see him today, that’s the only complaint I will have against him.

“The number one rule in Sri Lanka is, if you are the captain, lead by example and do not allow any outsiders coming into that setup. That’s the only way we ran the show and survived. It was unfortunate and it was not easy, either.

“You need to deal with a lot of unwanted elements. But if you are a strong character, that’s something you have to do. I have nothing against him. He is a brilliant cricketer and a wonderful person but he did not handle this situation well. He should be the one who is leading this team at the World Cup. He had to give up because it was too much for him. But it was his fault.

“I think (Chandimal) was another victim of cricket politics. In the sense, he was another player like Angelo Mathews who was snared to elements behind the scene and went along with them rather than taking control of the team and being a strong leader,” he added. 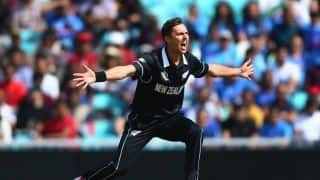