England head coach Trevor Bayliss is optimistic that Jos Buttler will be fit to play in Friday's World Cup match with the West Indies in Southampton.

England head coach Trevor Bayliss is optimistic that Jos Buttler will be fit to play in Friday’s World Cup match with the West Indies in Southampton. Buttler hurt his right hip while batting in England’s win against Bangladesh, hobbling for the remainder of his knock and passing on wicketkeeping duties to Jonny Bairstow for the West Indies innings.

He was scheduled to join his team-mates during a net session at the Hampshire Bowl on Wednesday and Bayliss said: “Yes, he’s fine. He’ll be taking part in today’s practice fully. It was a little bit precautionary the other day. He said he could have kept, but he wasn’t really sure if he would be able to run after a high catch.”

Asked if Buttler might play as a specialist batsman to lighten his workload in the field, Bayliss kept his options open.

“I haven’t really thought about it. We’ll make that decision in the next day or so,” the Australian said. “We’ll see how he pulls up and how he performs at practice. I’m expecting him to play a full part.”

Buttler has been in fine form at the World Cup, with scores of 18, 103 and 64 all coming at punishing strike rates. Should Buttler fail to prove his fitness, Hampshire’s James Vince would be the likeliest pick in his role as spare batsman.

Allrounder Moeen Ali is also eyeing a return to the team after sitting out the 106-run victory over the Bangladesh in Cardiff. His off-breaks were deemed surplus to requirements in a seam-heavy attack at Sophia Gardens, but he could come back into consideration in Southampton. 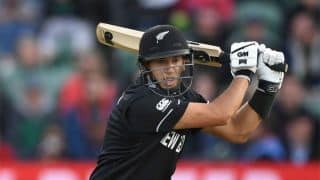