Afghanistan have included all three spinners for this tie Rashid Khan, Mujeeb Ur Rahman and Mohammab Nabi.

Afghanistan captain Gulbadin Naib has won the toss and will bat in their first match against the defending champions Australia in Match 4 of the ICC World Cup 2019 at the County Ground in Bristol on Saturday.

Afghanistan have included all three spinners for this tie Rashid Khan, Mujeeb Ur Rahman and Mohammab Nabi while Australia have opted to go ahead with Usman Khawaja ahead of the underperforming Shaun Marsh.

Gulbadin Naib: “We are gonna bat first. Looks a good wicket, flat as well and we have three spinners. Hence, we’re batting first and hoping to put a good score on the board. Yes, they (Australia) are a champion side and we need to start well against them. (On playing three spinners) Everyone knows about the spinners of Afghanistan, all of them are experience and skilled – Nabi, Mujeeb and Rashid.”

Aaron Finch: “I would have batted first as well, looks a good wicket to put runs on the board. Not that hard on top and hopefully, we can get some movement early on. (On Khawaja over Marsh) Usman’s form over the last 14-15 games was too good to ignore. Really tough call but we had to make it. Lyon, Richardson and Behrendorff are the others missing out.” 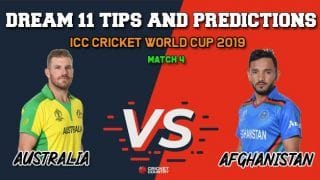