Afghanistan went down to defending champions Australia by seven wickets on June 1, while an inexperienced Sri Lanka unit were blown away by New Zealand.

Gulbadin Naib has won the toss and Afganistan have opted to field against Sri Lanka in Match 7 of the ICC World Cup 2019 at Sophia Gardens in Cardiff on Tuesday with both teams in search of their first win.

Afghanistan went down to defending champions Australia by seven wickets on June 1, while an inexperienced Sri Lanka unit were blown away by New Zealand on the same day.

Despite the loss, Afghanistan have made no changes to their playing XI, while Sri Lanka have left out Jeevan Mendis for the pacer Nuwan Pradeep.

Gulbadin Naib: “We want to bowl first. The conditions are good for the bowlers. It’s a good toss to win. We struggled in the middle, we put a good total, but that wasn’t good enough against a good team like Australia. Sri Lanka is a champion side. No changes.”

Dimuth Karunaratne: “In the last game also we batted first. The batsmen have an idea how to bat here. It’s (captaincy) not easy, it’s a good challenge. They give me support. Jeevan Mendis is not playing. Pradeep is playing.” Afghanistan vs Sri Lanka, Match 7, Cricket World Cup 2019, LIVE streaming: Teams, time in IST and where to watch on TV and online in India 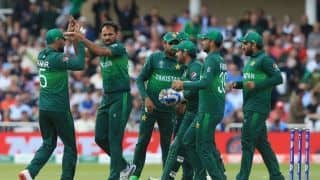