Australia sit in the top four of the points table, but Finch believes they haven't hit top gear.

LONDON: Aaron Finch‘s pre-match press conference began with chuckles and ended in laughter. In between that, Finch spoke honestly and astutely about himself and his team-mates, and smiled several times. But more on that last bit shortly.

As he entered the area adjacent to the indoor batting nets in the basement of Kennington Oval, Finch was accompanied by Zachary and Hugo, the young sons of Brad Haddin, the former Australia wicketkeeper now part of the defending champions’ coaching set-up at the ICC Cricket World Cup 2019.

Its not something you see during international cricket press conferences, but such is the mood in the Australian camp that someone thought it a cute touch to send Zachary and Hugo, aged ten and seven respectively, along with Finch to speak to reporters a day before the match against Sri Lanka. Finch began the session by asking Hugo if the microphone in front of him was working, to which the child said a confident ‘yes’.

After speaking to the media for about 15-odd minutes, as Finch began to get up front his seat, Zachary picked up the microphone and asked if he could pose a question to Finch. The skipper nodded, and the boy chided him about when he planned to win a toss.

Everyone laughed, and Zachary blushed. Finch then asked Zachary if he could ask him a question: “Do you have a girlfriend?”

Immediately, as the gathered media burst out laughing, a red-faced Zachary replied: “No!”

In between the cute interplay between the young boy and Finch, Australia’s captain was asked questions on Marcus Stoinis’ fitness, the mood in the Australian team, how they assess Sri Lanka, his captaincy, his future as a Test player, Glenn Maxwell and David Warner, Australia’s fielding and his left-arm spin.

While Finch was quick to dismiss his variety of bowling, even though if produced a wicket against Pakistan in the last match in Taunton, his assessment of everything else was candid.

Asked about Maxwell batting higher than Shaun Marsh and Usman Khawaja in Taunton, Finch admitted it was the wrong decision taken by himself.

“That was my decision to send him on in, and [I] probably didn’t make the right call on how tough the wicket was to walk in and really up the ante,” he said. “So that was my bad mistake, especially after being out there for 20 overs. It was probably a wicket that we could have built for a little bit longer and tried to have maximum impact right at the end, rather than maximum impact for 25 overs.”

Asked about when he wanted to see Australia’s batting click, Finch shot back with a grin: “Every game. Every game would be nice.”

On Australia’s fielding, Finch was articulate in explaining where he feels his team are superior. “I think having Smith and Warner, back in the ring there, that creates a huge amount of presence. Dave, in particular, is so quick. He mightn’t have the best arm at the moment but he’s so quick to the ball that you can’t run,” he said.

“Smith is like a flytrap there at slip, and also when he gets in that short cover, he reads angles and he anticipates so well. Maxwell, we know how good he can be. He’s up there with the best in the world when he’s hitting the stumps like he did the other day, at a crucial time. And then you have [Nathan] Coulter-Nile who is a gun fielding on the boundary, Stoinis when he’s fit is unbelievable on the boundary. He’s quick. He’s got an unbelievable arm. We feel there’s a lot of bases covered there. All our quick bowlers are really good. All our spinners are good. Zams [Adam Zampa] has really safe hands.”

And did Finch think that it is advantage that Sri Lanka have not played a game since June 4?

“It’s not ideal, is it, when rain plays a big part in a tournament like this?” said Finch. “I think Sri Lanka have been unlucky with a couple of games they have had watched out. You look down their side, and there’s a lot of experience there. There’s a lot of world-class players. So Sri Lanka, they are going to be a very tough opposition, no doubt.”

Finch’s honest answers to the questions posed to him underline a man confident in where he his, as batsman and captain. It indicates his head space, and that this is the right man to lead Australia.

When you think back on where Finch was a few months ago, during a terrible run of batting form in ODIs, being dropped from Australia’s Test squad and then overseeing a string of limited-overs defeats, to the point where his place in the team was being questioned, this was a different Finch.

An upbeat Finch, one that has a huge role to play in driving Australia towards their goal: to defend the World Cup trophy.

Australia sit in the top four of the points table, but Finch says they have not hit top gear yet. He believes they can go the distance, and that the batting has what it takes to put up big totals consistently. He can admit a mistake, and sees in his squad the depth of skill needed to win a World Cup. Finch and this Australian team have come a long way in 2019, from being seen as hopeless contenders for the tournament to one of the favourites, alongside India and England.

From looking like a salesman who couldn t make a sale earlier this yea, Finch today speaks with unmistakable confidence and a refreshing honesty. He even laughs.

Maybe he’ll win a toss or three this World Cup, but if he doesn’t, it probably won’t matter. 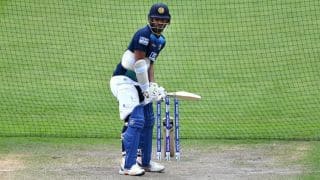