BIRMINGHAM: India have confirmed their place in the semi-finals of the ICC Cricket World Cup 2019 by beating Bangladesh by 28 runs at Edgbaston on Tuesday.

Bangladesh are now out of the reckoning for the final four and could end Pakistan’s campaign at Lord’s on Friday.

On the same pitch on which they lost to England two days earlier, India threatened to touch 350 on the back of their best opening stand of the tournament, fashioned by Rohit Sharma‘s 104 – his fourth century of the World Cup, a joint record – and 77 from KL Rahul, but losing four wickets inside ten overs set them back. A double-wicket maiden 39th over from Mustafizur Rahman gave Bangladesh hope, and when he added three in the last over of India’s innings you felt that Mashrafe Mortaza’s team was in with a decent chance.

Alas, for Bangladesh, just one bowler and two batsmen stood out. Mustafizur’s 5/59 went a long way in Bangladesh restricting India to 314/9 after an opening stand of 180 in 29.2 overs, in the chase it was, of course, that man Shakib Al Hasan who dug in with 66 to become the first player in World Cup history to score 500 runs and take 10 wickets in a single edition. A steady flow of wickets kept India ahead of the curve, and only some brave lower-order resistance from Mohammad Saifuddin lessened the margin of defeat. Hardik Pandya proved Bangladesh’s scourge, taking out Soumya Sarkar, Shakib and Liton Das with his clever changes of pace and Jasprit Bumrah did what he does best, returning at key junctures to take wickets.

INDIA vs BANGLADESH SCORECARD | AS IT HAPPENED

Kohli winning the toss on a dry surface was a great way to start the game, and Rohit – dropped on 9 by Tamim Iqbal at deep midwicket off Mustafizur – and Rahul immediately went about their business. Bangladesh’s bowlers fed Rohit a steady stream of hit-me balls and he latched on with glee. The fourth ball of the match was pulled for six over square leg. In the fifth over, he used his feet to manufacture six over extra cover off Saifuddin.

Mustafizur was slashed and steered wide of slip, Saifuddin thumped for consecutive fours past fine leg and into the gap between cover and mid-off. Shakib was heaved over midwicket for six to end a slow period of nine runs in four overs. Rohit’s half-century took 45 balls.

Rahul wasn’t as fluent but helped Rohit forge a big stand. He drove well, defended even better and when the chances came, Rahul twirled with exaggeration to keep runs ticking. He reached his half-century in 57 deliveries.

His hundred secured with a cut off Shakib for one, Rohit clipped his next ball for four to move to 104 and was out immediately after that, mistiming a lofted drive off Soumya to cover. For context, only one man before Rohit has four centuries in a single World Cup – Kumar Sangakkara, who reeled off four in a row in 2015.

From here, India’s innings lost momentum. On 77, Rahul steered Rubel Hossain to a diving Mushfiqur behind the stumps. Kohli unfurled a few jaw-dropping shots but was disgusted with himself when, on 26, he pulled a short ball from Mustafizur to the fielder stationed at deep midwicket. Then Mustafizur got Pandya for zero, poking and nicking to Soumya at slip. Two wickets for no runs.

No matter to Rishabh Pant, who proceeded to hit Saifuddin for three fours in a row: past extra-cover, over midwicket and behind point. Though he had a few iffy moments, Pant was more assured than he had been against England. He stepped out to hit Mosaddek for six, paddled Shakib with power and swept Soumya off the pads while losing balance. Having crossed his previous ODI best of 36, Pant missed a maiden fifty by by two runs when he heaved a ball from Shakib to deep midwicket.

Mustafizur also finished well with the wickets of Dinesh Karthik in the 48th over and MS Dhoni and Bumrah in the 50th.

Set a target of 315, Bangladesh lost three wickets in 23 overs to underline the squandered starts from Tamim (22), Soumya (33) and Mushfiqur (24). Tamim was the first wicket to fall, bowled by Mohammed Shami when he under-edged a leaden-footed drive. Soumya scored another pretty innings – his fourth of the tournament between 25 and 42 – before he slapped a hit-me ball from Pandya to Kohli at cover. Mushfiqur looked quite good for his 24 before he swept Yuzvendra Chahal straight to Shami at midwicket.

Liton, two balls after he hit the shot of the innings off Pandya, an effortless pickup for six over long-on, lobbed a pull shot straight to midwicket. This left Shakib, on 57 at the time, to drop his head in disappointment.

Shakib had paced his innings well, running hard between the wickets and lacing deliveries into the offside for easy runs, but with each passing departure of a team-mate the asking rate increased. Bumrah returned and had Mosaddek chopping onto the stumps, and when Pandya suckered Shakib into the tamest of pushes to the cover fielder, deceived by the pace, the chase was officially snuffed out.

Sabbir Rahman, in his second match of the tournament, hit a few punchy boundaries and Saifuddin gave the Bangladesh fans something to cheer about a very fine unbeaten 51. The pair kept India in the field with a stand of 66, which ended when Sabbir (36) missed a slog at Bumrah.

Saifuddin didn’t cave in, clouting fours off every bowler who bowled to him. His pulling, in particular, was immense. When he drilled Bumrah straight back past the stumps for four in the 48th over to reach his second ODI half-century, Saifuddin raised his bat to the Bangladesh dressing room and tugged on the team logo on his chest. If Saifuddin’s senior team-mates had shown as much spark, Bangladesh could have seriously threatened India’s underwhelming total. 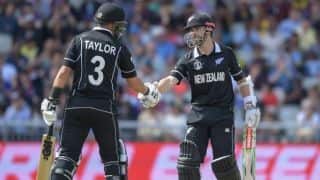 Match highlights India vs Bangladesh, Match 40: Jasprit Bumah finishes it off, India win by 28 runs and qualify for the semi-finals