The defeat at the Lord s has now made England s path to the semifinals a little difficult than it was earlier.

Aaron Finch scored his second hundred in the ICC Cricket World Cup 2019 while Jason Behrendorff, who replaced Nathan Coulter-Nile in the playing XI, registered his maiden five-wicket haul and Mitchell Starc scalped four wickets as Australia beat England by 64 runs in the 32nd match of the World Cup at the Lord s Cricket Ground in London on Tuesday.

The win over the Eoin Morgan-led side also helped Australia become the first team to make it to the semifinals of the World Cup 2019.

While Australia failed to post a big total on the board despite Finch and David Warner s 123-run opening stand and were restricted to 285/7, it eventually turned out to be more than enough as England were bowled out for 221 in 44.4 overs.

ALSO READ: Our fate is in our own hands, says Morgan as Finch backs watchful Warner

This was Australia s sixth win from seven games and with it, they moved to the top spot in the points table with 12 points against their name.

England, meanwhile, suffered their second successive defeat and third overall in the ongoing World Cup 2019 and occupying fourth spot in the points table, with eight points against their name.

The defeat at the Lord s has now made England s path to the semifinals a little difficult than it was not less than a week ago. 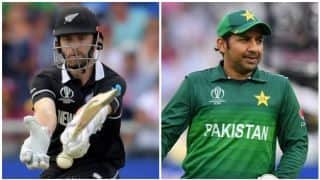