Vijay Shankar was hit by a Jasprit Bumrah yorker during the net practice.

The International Cricket Council (ICC) on Monday approved BCCI’s request to call up Mayank Agarwal as a replacement for injured Indian allrounder Vijay Shankar in the World Cup.

Vijay Shankar was hit on a left toe by a Jasprit Bumrah yorker during the net practice. While he played against West Indies, he was replaced by Rishabh Pant for the game against England on Sunday.

“Mr Vijay Shankar was struck on the left big toe whilst batting in the nets on June 19th in Southampton. He was able to play in an unrestricted manner in the following two matches against Afghanistan and West Indies,” said BCCI in a media release.

“Following the match on June 27, the condition of his toe worsened and a CT scan showed he sustained a non-displaced fracture of the left big toe. The condition will require a minimum of three weeks to heal. The injury rules him out of the ongoing World Cup,” added BCCI.

Approving the Indian team management’s request to include Agarwal in the squad, ICC said: “The International Cricket Council has confirmed that the Event Technical Committee of the ICC Men s Cricket World Cup 2019 has approved Mayank Agarwal as a replacement player for Vijay Shankar in the India squad for the remainder of the tournament.”

“All-rounder Shankar has been ruled out of further participation in the event due to a toe injury sustained during a training session. Twenty eight-year-old Agarwal, a top-order batsman, has played two Tests but is yet to play an ODI.

The replacement of a player requires the approval of the Event Technical Committee before the replacement player can be officially added to the squad,” added ICC. 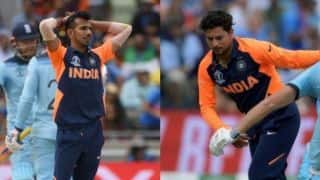