Dhoni scored 50 off 72 balls in India's 18 run defeat at the hands of Black Caps and the skipper once again came to veteran's defence on his slow approach during the middle overs.

India captain Virat Kohli Wednesday said MS Dhoni has not told him anything about his future plans amid speculation that the veteran may call it quits after team’s semi-final exit from the ICC Cricket World Cup 2019.

Dhoni scored 50 off 72 balls in India’s 18 run defeat at the hands of New Zealand and the skipper once again came to veteran’s defence on his slow approach during the middle overs.

Asked if Dhoni has said anything about his future plans, with squad for the West Indies tour to be announced soon, Kohli said, “No he hasn’t told us anything as of now.”

Dhoni, coming in to bat at 71 for 5, it was not easy to accelerate straightaway and it needed a rebuilding which he did alongside Ravindra Jadeja.

“I think Dhoni had to hold the innings from one end and allow Jadeja to play freely. He batted in the right way. He has been given a specific role as per the team situation and he played accordingly. They had a 100-run partnership from that situation,” Kohli defended the former skipper. (ALSO READ: ‘Unfair to expect Dhoni to finish the game all the time’)

The skipper also feels that it is “very easy to criticize sitting from outside”. “Yes, we are not denying that we made errors but in hindsight, we can criticise a lot,” Kohli said.

His opposite number Kane Williamson felt that Dhoni’s run out was the turning point of the match. Asked if he would have been the captain, would have still persisted with Dhoni, he cheekily enquired, “Is he changing his nationality?” 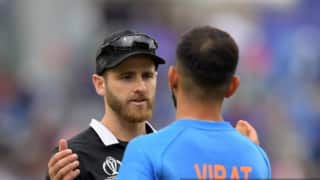