New Zealand will play in their second straight World Cup final against the winner of the second semi-final between England and Australia to be played on Thursday.

After a narrow 18-run win over India in the semi-final of the ICC Cricket World Cup 2019 at the Old Trafford on Wednesday, New Zealand skipper Kane Williamson felt that Mahendra Singh Dhoni‘s run out in the penultimate over of the match was the turning point of the game as his presence would have made the difference.

In the rain-hit semi-final played over two days, New Zealand scored 239/8 in 50 overs after opting to bat. In reply, India lost four top order batsmen for just 24 runs inside 10 overs before Ravindra Jadeja (77) and Dhoni (50) shared a 116-run seventh wicket stand to raise hopes of an unlikely victory.

However, it wasn’t enough in the end, especially after the Indian stumper was caught short of crease by a brilliant direct hit by Martin Guptill in the 49th over.

Speaking at the post-match press conference, Williamson said: “We all know the game is a fine line in a number of ways. But that run out was significant. We’ve seen Dhoni finish games from similar positions on a number of occasions.

“It was a tough surface, but to dismiss Dhoni in whatever fashion is extremely important. The direct hit run out was a big moment in the game,” he added. (ALSO READ: Kohli opens up on MS Dhoni’s future)

Dhoni has been under fire in recent times for his slow batting, but the Kiwi skipper backed the superstar from Ranchi, terming him as a world-class player.

“Yes, experience at this level and in these occasions is very important. His (Dhoni’s) contribution throughout this campaign was extremely important. His partnership with Jadeja, who came in and hit the ball better than anybody in both the teams, was very, very valuable. He’s a world-class cricketer,” Williamson said.

New Zealand will play in their second straight World Cup final against the winner of the second semi-final between England and Australia to be played on Thursday. Incidentally, the Black Caps have lost to both the teams in the group stages.

“Every game throughout the round-robin was worth a couple of points, so they were all important. Obviously, a semi-final is worth a few more than two points. But, you know, we’ll go into the final and try and implement similar things that are important to our side, that gives us the best chance of success.

“There were so many strong teams in the tournament. Another semi-final tomorrow can go either way with two very good sides playing. But we will turn up on the day like the other matches, and anybody can beat anybody. It’s important to have your feet on the ground,” he added. (ALSO READ: Team India physio Patrick Farhart quits after semi-final exit against New Zealand)

It was also a special moment for Guptill, who, despite failing with the bat yet again, earned a lot of praise for catching Dhoni short of crease with a brilliant direct throw.

Lauding Guptill, Williamson said: “He’s probably the only man on the pitch who could have effected that run out. Contributions can come in so many different ways, and I think he’s right up there on the fielding charts. For him to do that and pull off what was a significant turning point in the match was special.”

India went into the game as hot favourites after finishing the group stage on top of the points table, while the Kiwis entered the last-four on the back of three straight losses. But Williamson said he never stopped believing in his team.

“There’s so much more to winning and losing. It’s really important that as a side you identify parts of matches where you may have not done things well and parts which perhaps were out of your control and went the opposition’s way,” he said. (ALSO READ: ‘I made many errors when I was young in my career, Rishabh Pant will learn’)

India’s loss on Wednesday broke a billion hearts as the cricket-crazy country had expected the Men in Blue to bring home the coveted trophy.

Speaking about Indian fans who turned up in large numbers at the Old Trafford on Wednesday, Williamson said: “I hope they’re not too angry. Obviously, the passion for the game in India is unrivalled and we are all fortunate to play this sport and have a country like India right behind it. There’s obviously huge amount of respect for India as a cricketing side. But the game of cricket can be a tough one on some occasions. 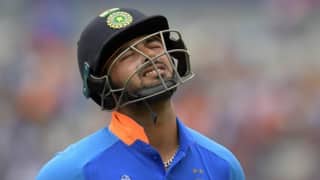 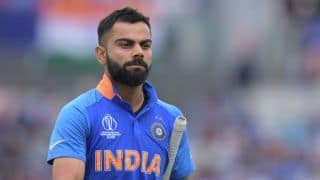