The England skipper also lauded the Kane Williamson-led New Zealand side for the fight it showed in the final.

England edged out New Zealand in a Super Over thriller in the final of the ICC Cricket World Cup 2019 and clinched their maiden World Cup triumph at the Lord’s Cricket Ground in London on Sunday.

“On a tough wicket where everyone found it tough to score, Buttler and Stokes put together a partnership, and I thought that would take us deep, and it did,” said Morgan.

“Full credit to the two boys who went out for the superover, given that they were there most recently. Archer just improves every time he goes out there. Really incredible – everyone in the changeroom today, Willey, Billings, whoever missed out on the squad – I’d like to mention them too.”

Morgan was equally vocal in his praise for the Kane Williamson-led New Zealand, who put up a solid fight only to end as a runners-up after a nail-biting final.

“There was a lot in that game, jeez. I’d like to commiserate Kane and his team. The fight that they show is worth aspiring to. The example that they lead is hugely commendable to him and his team,” added Morgan.

Morgan also highlighted that the England side has come a long way in the last four years, following their early exit from World Cup 2015.

“This has been a four-year journey. We have developed a lot over those years, especially the last two. We find it hard to play on wickets like that. To get over the line today means the world to us,” concluded Morgan. 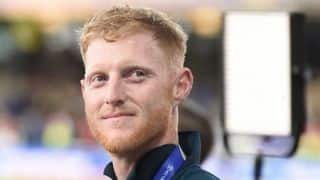 To hell and back: Ben Stokes’ incredible redemption rewards England its crowning jewel