Bangladesh's push for their first World Cup semi-final is over, but they hope to beat Pakistan.

LONDON: After Bangladesh‘s loss to India at Edgbaston on Tuesday, it was expected that the skipper Mashrafe Mortaza would address the post-match briefing. Instead, the head coach Steve Rhodes showed up and spoke immediately of the hurt in the Bangladesh dressing room.

Two days later, Rhodes again showed up for the pre-match press conference at Lord’s which left many traveling Bangladesh journalists surprised. This is Mortaza’s last World Cup match, and potentially his final for Bangladesh considering that their next home ODI is not scheduled for roughly a year. Since Mortaza has long retired from Tests and does not play T20Is, this match against Pakistan at Lord’s could be his final appearance in a Bangladesh jersey.

He’s lugged his creaking body – seven surgeries to date – across England, with Shakib Al Hasan and Rhodes at different times during the tournament stressing the importance of Mortaza being so strong-willed. He has struggled to complete his quota of ten overs, he has gone for runs. He has one wicket from 49 overs in seven matches. In the match against India on Tuesday, Mortaza was taken for ten runs in the first over and took himself out of the attack.

After the World Cup, Bangladesh are due to tour Sri Lanka, a tour that was brought forward from later in the year, after the two-Test trip to India in October. Rhodes could not say whether Mortaza will travel to Sri Lanka, but did say that if he was not on the flight, Bangladesh cricket must move on.

His point is that like countless cricketing icons, Mortaza too will leave the sport at some point and that the game will move on, as it must.

“He’s our leader. If he’s on that plane to Sri Lanka, fine. If he’s decided else different, then fine, we move on. That actually is life. If he’s with us, great, let’s take that into consideration and win the games in Sri Lanka. If he’s not with us, let’s move on,” said Rhodes.

“The one thing about Mashrafe with the players is that they respect him incredibly,” added Rhodes. “I often use the word warrior, but he goes to war for the team, does Mashrafe, and people respect that, understand that, and they love him because of that. The players in the dressing room do love Mash, and this is … he has said it’s his last World Cup, and it will be emotional for him.

Bangladesh are certainly not viewing this match at Lord’s as a dead rubber. They’ve beaten South Africa, West Indies and Afghanistan. They should have beaten New Zealand. They came close to beating India. They want to beat Pakistan – whom they’ve defeated in their last four ODIs dating back to 2015 – to send off Mortaza on a high and give their wildly passionate fans a reason to cheer.

“Firstly, Bangladesh versus Pakistan at Lord’s, the beautiful Lord’s, there’s no such thing as a dead rubber. Both teams desperate to beat each other. We certainly are. I’m pretty sure they are. They’ve got a lot to play for as well,” said Rhodes.

“We’re looking to obviously win. We want to win. We’ve practiced well today. We’ve come up with some good plans. When we lost against India, it wasn’t a case of … it was we were out of the tournament, but we all recognise that there’s one more game to go and one special occasion at Lord’s and a very good, tough team to beat as well. So if we can take the scalp of Pakistan in the World Cup, I’ll be very, very proud of the boys.

“I certainly know that the players will be desperate to win, and there will be no such thing of taking it easy. This is an international match, an ODI, a World Cup game against great opposition, and Bangladesh will be doing their very, very best to win the game. If we beat Pakistan, I think we’ve had a very good World Cup, even though we’ve not qualified.”

For Bangladesh, the real champion this World Cup has been Shakib. With 542 runs at an average of 90.33 and 11 wickets, he is the indisputable top allrounder of the tournament. Rhodes said he was honoured to have the chance to work closely with Shakib, while admitting that he did not have to do much given the veteran Bangladesh allrounder’s pedigree.

Sometimes as a player, when you do well and get some runs, you almost think, well, I’m not going to get some the next game, which is not the attitude. There’s no reason why you can’t get the runs in the next game. That’s what he does. He’s churned them out every single match. I think his low score was 40, which is an amazing effort. But added to that, he’s done his bowling as well. He’s bowled beautifully at times for us.

“He’s an amazing character. I have good communication with Shakib, but there’s not a lot I do except be there for him in case he needs somebody to bounce some ideas off. Often it’s me doing that to him. I’m the one going to him, I’ve got this dilemma. What do you reckon? Why wouldn’t you do that with one of the most talented, gifted, and clever brands and a guy who’s played a hell of a lot of cricket internationally?” 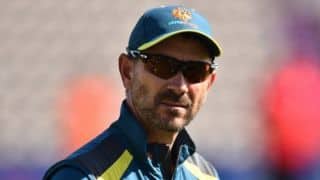