Mumbai Indians bowlers made most of the slowness of the MA Chidambaran track in Match 44 of IPL 2019 against Chennai Super Kings on Friday as they pummeled the hosts by 46 runs, defending a total of 155/4, made largely owing to skipper Rohit Sharma's 48-ball 67.

Mumbai Indians bowlers made most of the slowness of the MA Chidambaran track in Match 44 of IPL 2019 against Chennai Super Kings on Friday as they pummeled the hosts by 46 runs, defending a total of 155/4, made largely owing to skipper Rohit Sharma‘s 48-ball 67.

Hardik Pandya once again played a crucial knock in the death overs with 23 off 18 balls before the bowlers, lead by Lasith Malinga (4/37), ran through the fickle CSK batting line-up, devoid of Faf du Plessis and MS Dhoni.

Dhoni and Ravindra Jadeja missed out due to fever while du Plessis was forced to be benched to keep the foreign players quota in balance.

In chase of what seemed like a below par target, CSK found themselves in all sorts of trouble losing three wickets in the Powerplay overs and things continued to go downward for the table toppers as they lost four more wickets in 10 overs, adding just 49 runs from overs six to 16, when the second strategic time-out was taken. (MATCH HIGHLIGHTS: CSK vs MI)

Shane Watson gifted his wicket away – with a legside whip to a Malinga delivery caught at short third man, caught by Deepak Chahar – Rohit introduced spin in the second over in the form of Krunal Pandya (2/7), who send down a tidy over of just two runs. Murali Vijay, playing his first game of the season got a four off Malinga past point, but was in the same over in the same region by MI debutant Ankul Roy.

Stand-in skipper Suresh Raina then tried to take on Hardik and perished first skying one to point where Suryakumar Yadav took an easy catch. Krunal then got one to go straight as Ambati Rayudu played for spin and was castled for a three-ball duck. CSK found themsleves tottering at 34/3.

Krunal had his second when he castled Kedar Jadhav for 6 when the middle-order bat tried to play a cut to a ball close to his body, eventually chopping it on to the stumps. Two overs later, young Dhruv Shorey succumbed to the pressure and mistimed one towards long-on to hand debutant allrounder Ankul Roy his first wicket for MI.

Jasprit Bumrah (2/10) then added the scalp of CSK’s best batsman on the night – Murali Vijay – for 38 off 35 balls, under controversial circumstances when Vijay’s cut was taken low by Suryakumar at point. The Umpires went upstairs to verify the legitimacy of the catch with the soft signal being out and with no conclusive evidence for the third umpire to overturn the decision, Vijay had to depart, much to the dismay of CSK dug out.

With No Dhoni for CSK to come, trey slumped further when Dwayne Bravo was undone by a slower one from Malinga in 15th over. Bumrah then got Chahar out and Malinga finished off the game with two wickets in one over as CSK were rolled over for their lowest total at home, 109 all out in 17.4 overs.

Even though Quinton de Kock was off the block early with a six off Chahar, he was undone by a slower one and was caught by the make shift wicketkeeper Rayudu for 15 of nine balls. Harbhajan sent down a tidy two overs conceding just five runs while Chahar s third was taken for two fours by Evin Lewis and one from Rohit. 16 runs came off it, but Harbhajan managed to finish off the powerplay with four-run over.Mumbai Indians reached 45/1 with Rohit on 17 off 14 balls and Lewis on 12 off 13 balls.

However, Rohit combined with Evin Lewis, playing his first game of IPL 2019 to add 75 runs for the second wicket in 57 balls to drive Mumbai. But CSK made a comeback with two quick wickets, when Mitchell Santner got rid of Lewis for 32 off 30 balls, caught at deep midwicket by Dwayne Bravo. Two runs later, Krunal fell to Imran Tahir attempting a wild hoick and was caught by Santner this time as MI went from 99/1 to 101/3. Rohit got to his first fifty off the season but failed to get going and departed in the 17th over caught at long-off by Murali Vijay, handinh Santner his second wicket.

And despite Hardik and Kieron Pollard, joining forces with 22 balls to go, the duo could only manage 33 runs off it with Chahar and Bravo finishing well. Pandya did hit Bravo for a four and six in the final over. 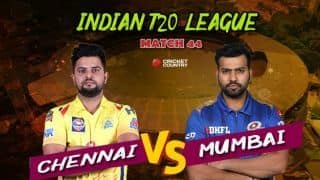 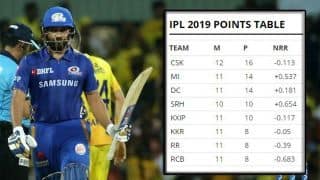