Game 53 of IPL 2019 pits together one team who is confirmed for the playoffs, Delhi Capitals, against the one which is nearest to elimination, Rajasthan Royals.

Needing a win to stay alive, Rajasthan Royals – with 11 points – cannot afford a poor game. Lose, and their IPL season is over. Despite having a poorer net run-rate than Kings XI Punjab, Rajasthan could still end up ahead of them on the IPL 2019 points table if they beat Delhi. This would give them 13 points.

But RR would still hope that Kolkata Knight Riders and KXIP lose their remaining games. Led by Steve Smith until now, RR are unbeaten in their last three matches, the most recent being the washout against eliminated Royal Challengers Bangalore.

After three wins in a row to stay on top of the IPL points table, Delhi Capitals were hammered by Chennai Super Kings on Wednesday to slip to second spot. After that loss, in which DC were bowled out for 99, the skipper Shreyas Iyer spoke of the team not playing “smart cricket”. The top spot on the table could still be Delhi’s, if they win and CSK lose their last match. Targeting No 1 must surely be the aim.

The franchise has been hit by the loss of Kagiso Rabada, this season’s Purple Cap holder for most wickets.

What: Delhi Capitals vs Rasthan Royals

Weather: Partly cloudy with a high of 41 degrees, which is respite given that Delhi on Friday saw temperatures reach 47.

Back at the Kotla, DC may want to drop Chris Morris for Sandeep Lamichhane to add a spinning option.

With Smith back in Australia, the captaincy will go back to Ajinkya Rahane. Smith’s place in the team looks set to go to fellow Australian Ashton Turner, unless Ish Sodhi gets the nod to bolster the spin attack.

For RR, Rahane and Sanju Samson are the only Indian players to cross 300 runs this season. In comparison, DC have two players with over 400 and one, Rishabh Pant, with 348.

Since he made 99 against KKR, Prithvi Shaw has managed 182 runs in 10 innings.

HEAD TO HEAD IN IPL

“There are small things we have to look into and come back strong in the next game. I wouldn’t blame myself nor the team.” – Shreyas Iyer

“Unfortunately for us, we didn’t cross the line and didn’t fall on the winning side. We still don’t know how things are in the table.” – Shreyas Gopal 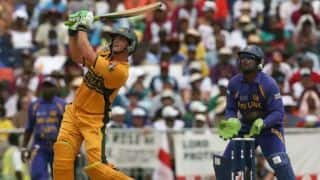