The result puts the playoff berth out of RCB's reach, while RR are still in the race on paper, but surely out of it for all practical purposes.

A torrent of rain for over two hours was followed by a sensational passage of play that had Virat Kohli smack 25 off just seven balls before Rajasthan Royals‘ Shreyas Gopal claimed a hat-trick removing Kohli, AB de Villiers and Marcus Stoinis of consecutive deliveries in the second over of a five-over innings in rain-curtailed Match 49 of IPL 2019 at the M Chinnaswamy Stadium on Tuesday with RCB eventually posting 62/7.

But, the Bangalore clouds opened up once again with RR on 42/1 in 3.2 overs and the match had to called off with both teams sharing one point each. The result puts the playoff berth out of RCB’s reach, while RR are still in the race on paper, but surely out of it for all practical purposes.

Earlier, after RR skipper Steve Smith won the toss and elected to bowl, the a heavy spell of rain delayed the start for over three hours. But, with final inspection on 11:05 pm IST, umpires Nigel Llong and Ulhas Gandhe, started the game. SCORECARD: RCB vs RR

Kohli began with a bang with two sixes off the first two balls of the innings bowled by Varun Aaron. A length ball was dispatched over long-off while the second one, an edge, went over the third man boundary. De Villiers added two fours as 23 runs came off the first over. HIGHLIGHTS: RCB vs RR

Gopal’s first three balls went for a six, four and a couple before Kohli mistimed one towards long-on, where Liam Livingstone held on to an easy catch. De Villiers sliced next one to extra cover where Riyan Parag took another easy catch. Stonis, facing the hat-trick ball then drove one straight to mid-on to hand Gopal his second hat-trick of the year. He had taken a hat-trick in the 2019 Syed Mushtaq Ali Trophy. ALSO READ: Shreyas Gopal claims 2nd hat-trick of IPL 2019

Parah added the wicket of Gurkeerat Singh in the third over while Parthiv Patel fell to Jaydev Unadkat in the fourth. Oshane Thomas then had Heinrich Klaasen caught at deep point for six, followed by the wicket of Pawan Negi. RCB ended on 62/7.

In reply, Sanju Samson was at his sublime best while the feisty Liam Livingstone too got going. Samson hit a six and four off Umesh Yadav, before Livingstone dug in to Nitin Saini with a six and a four of his own. Kulwant Khejroliya’s third over went for 18 runs with RR racing to 40/0 in three overs, but before the fourth over could be finished, the heaven opened up for the one last time and that was the game. Samson departed to Yuzvendra Chahal for 28 off 20 balls. 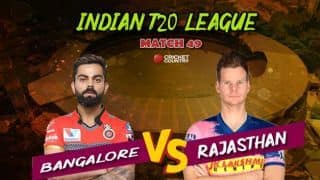