Hello and welcome to our match coverage of Match 49 of IPL 2019 between Royal Challengers Bangalore and Rajasthan Royals at the M Chinnaswamy Stadium, Bangalore on Tuesday.

12:40 am: It’s time to bring down the curtain on what has been a really dramatic finish to an even wet encounter. Hope you enjoyed our coverage today. See ya tomorrow, goodnight!

12:28 pm: Summary: That didn’t take long to finish, but what an anti-climatic finish it was. RCB are officially knocked out of the tournament. Just needed 10 more balls for a result, but it was too much to ask the weather Gods. After all the wait, Virat Kohli and AB de Villiers gave RCB a fiery start before Shreyas Gopal picked up the second hat-trick of IPL 2019 (ALSO READ: Shreyas Gopal claims 2nd hat-trick of IPL 2019, removing Virat Kohli, Ab de Villiers and Marcus Stoinis). RR were in when Sanju Samson was at the crease, but Chahal struck just in time and then heavens opened up to spoil an exciting finish. But that’s the nature of the sport.

12:25 am: Some quick reactions from a very surprising finish, thanks to the rain.

4th over: BOWLING CHANGE: BIG WICKET! Yuzvendra Chahal comes into the attack and he strikes immediately with the crucial wicket of Sanju Samson who lobbed this one to Pawan Negi. Samson departs for 28. WOAH! It’s begun to rain, and that’s that. The match has been abandoned, RCB are officially out of the tournament.

3rd over: BOWLING CHANGE: The debutante, Kulwant Khejroliya comes into the attack to bowl his left-arm medium pacers and Sanju Samson has deposited his first delivery for a SIX over cow corner. And he finishes it off with another MAXIMUM. Exceptional stuff this is from Samson. 18 runs from the over. RR 40/0 (Samson 28, Livingstone 11)

2nd over: Navdeep Saini comes into the attack. Liam Livingstone gets into the act, whacks Saini for a SIX and a BOUNDARY. Saini finishes well though, 12 runs from this over. RR 22/0 (Samson 11, Livingstone 11)

11.59 pm: Summary: Another abject failure from RCB. Kohli and AB de Villiers got them off to a flying start, but Shreyas Gopal turned things around claiming a sensational hat-trick, his first in the IPL. Right then, 63 is what RR need to win and knock out RCB from the tournament. Stay tuned for the run-chase. Be back in 5!

5th over: Oshane Thomas to bowl the final over and RCB have finished at 62/7. Thomas too pocketed a wicket in this over off Pawan Negi, who added 4 runs.

4th over: BOWLING CHANGE: WICKET! Jaydev Unadkat introduced into the attack. After smashing a BOUNDARY, Parthiv Patel throws his wicket. He tries to be cheeky and walks across his stumps to hit it over the fielder at fine leg, but unfortunately, he ends up hitting it straight to Oshane Thomas. Pathiv walks back for 8. 9 runs and the wicket in this over. RCB 54/5 (Klaasen 5)

3rd over: WICKET! Riyan Parag comes into the attack to bowl his leg-spinners. RCB’s procession continues. Gurkeerat Singh Mann departs for 6. Parthiv Patel joins Klaasen in the middle. 10 runs and the wicket in this over. RCB 45/4 (Klaasen 4, Parthiv Patel 0)

2nd over: SPIN INTRODUCED! HAT-TRICK! Shreyas Gopal comes into the attack to bowl his leg-spinners. After smashing the local boy Gopal for a SIX and a BOUNDARY, Kohli’s party ended following an entertaining seven-ball stay at the crease which yielded a stunning 25 runs. Kohli went after the tossed delivery, but didn’t connect leaving Liam Livingstone catch an easy one at long-on. AB de Villiers and Marcus Stoinis followed soon after with scores of 10 and nought respectively giving Shreyas Gopal his hat-trick, take a bow! 12 runs and 3 wickets in this over. RCB 35/3 (Heinrich Klaasen 0)

1st over: SIXES! Virat Kohli has given RCB a fiery start smashing not one, but TWO SIXES in a row off Varun Aaron, one each deep into the long-off stands and the second one to third man region. AB de Villiers, the other opener, is off the mark with consecutive BOUNDARIES. 23 runs come from the opening over. RCB 23/0 (Virat Kohli 13, AB de Villiers 10)

Must win game for RCB. Virat Kohli and AB de Villiers walk out to open the innings. Powerplay is of 2 overs and 1 over per bowler. Varun Aaron will open the bowling for RR. Let’s go!

10.50 pm: The umpires are in the middle and looking at the problem areas. The next inspection is at 11:05 pm, which is 21 mins before the cut-off time.

10.20 pm: Pitch inspection will be at 10.40 pm subject to no more further rain. Positive signs. The stumps are being erected.

9.41 pm: More and more rain at Bengaluru. It’s getting really heavy now. Signs of play beginning diminishing by the minute.

9.14 pm: Here’s an update from the scorers: 11:26 pm is the cut-off for a 5-overs-a-side contest. We have now started to lose overs. 9pm was the cut-off. Waiting for the umpires on how many overs we lose, but we have to wait for the run to stop. The whole square is now covered!

9:07 pm: BAD NEWS, GUYS! The rain is back and so are the covers. This is painful! If today’s match is a washout, then RCB will be officially knocked out of the tournament.

8.56 pm: The current situation looks quite dicey, but there’s GOOD NEWS, the rain has STOPPED and the covers are coming off!

8.40 pm: There’s really nothing happening at the Chinnaswamy Stadium barring tons of rainfall and a short circuit incident that happened in one of the hospitality stands close to the press box.

8.25 pm: The heavy downpour has been reduced to a mere drizzle. The covers still very much intact. There’s news coming in that if the game starts on/before about 9:15pm, then we will have a full 20 overs-a-side affair then. The super soppers are waiting on the sidelines. The rain has almost subsided.

8.18 pm: It’s still raining. Overs will start getting deducted post 9 pm local time which is roughly about 50 minutes from now. However, remember the outfield and drainage at Chinnaswamy is very good, one of the best in the country in fact.

8:01 pm: So, it’s ABSOLUTELY POURING at the Chinnaswamy Stadium! There’s going to be a long wait before play begins.

7.55 pm: OH NO! This was almost expected. It has begun to pour at the M Chinnaswamy Stadium. The groundstaff are bringing in the covers. It doesn’t seem heavy, just a faint drizzle, but enough to hold play. Guess, we were wrong! It’s come down heavily now. This DOES NOT LOOK GOOD! There’s going to be a delayed start here, but stay tuned as we keep you posted with all the latest updates.

Virat Kohli: “I was trying to practice the coin toss, nothing seems to be working. I’ve lost 10 tosses out of 12. This is a ground where the pitch is going to be nice in both the innings. Still if you play good cricket and bowl well, you have a good chance of winning. We can max get to 12 points, it’s about enjoying these two games. The reason why we bounced back is because we focussed on that (Having fun). We can’t afford to take too much of pressure. Couple of changes. Pawan Negi makes his way back into the team because of number of right-handers they have in their team, Kulwant plays his first game in place of Shivam Dube.”

Steve Smith: “We are going to bowl, looks a pretty good wicket. Hopefully, we can bowl well and restrict them to a good total. You don’t try to think too much about that (playoffs). We just have to play to win. One change for us. Mahipal Lomror comes in for Ashton Turner.”

RCB make a couple of changes. Pawan Negi is back in the side, Kulwant Khejroliya will make his debut.

7.30 pm: TOSS: Steve Smith has won the toss and Rajasthan Royals have opted to bowl,

7.29 pm: PITCH REPORT: “It looks like a good wicket, it’s a beauty. There is a little bit of grass. There should be good pace and bounce,” says Brendon McCullum.

7.22 pm: Toss in a few minutes from now. It rained at 6.15 pm. The square and practice pitches were covered until now. The covers are being removed. Paddy Upton and Steve Smith are headed to the pitch while two mini super soppers are in action for the last 15-20 minutes.

7:00 pm: Despite landing awkwardly while fielding in the previous game, Rajasthan Royals captain Steve Smith has ruled out any major concern to his sensitive elbow, though admitting his right arm isn’t at a 100 per cent throwing capacity yet. RR will not tamper with their winning combination after a morale-boosting win in Hyderabad.

6.56 pm: Some team news: Virat Kohli included the extra bowler in Shivam Dube, but felt the pinch. Kohli will definitely make a change which means Dube, who has scored 40 runs in four outings so far this season, will have to sit out.

6.53 pm: So, it did rain in the evening, but the good news is that there’s no imminent threat of weather playing spoilsport.

6.46 pm: Royal Challengers Bangalore, I repeat, RCB and Rajasthan Royals are still alive in this tournament. For RCB, they need to win their remaining two matches with big wins and hope that the other results fall into their lap. For RR, another win betters their fate to make it to the playoffs. It’s all happening at the M Chinnaswamy Stadium, a belter of a surface, this is match 49 of the Indian Premier League (IPL 2019). Stay tuned as we build up to this exciting contest. (POINTS TABLE)

Today s IPL match is between Royal Challengers Bangalore and Rajasthan Royals at the M Chinnaswamy Stadium in Bangalore.

Rajasthan, with 10 points from 12 games, still have a theoretical chance to make it to the IPL 2019 playoffs, provided they do not lose any of their remaining two matches. Also, they would require Chennai Super Kings, Mumbai Indians and Delhi Capitals to defeat their respective opponents.

With a loss to Delhi Capitals in their previous game, RCB s slim chances of qualifying for the playoffs went up in smoke and even though there is a mathematical chance for them to qualify, given they would need to win both of their remaining games, skipper Virat Kohli seems to have resigned to the fact that his team is out of the race.

From the RCB squad, only four players have not a game: Himmat Singh, Kulwant Khejroliya, Milind Kumar and 18-year-old Devdutt Padikkal all young and highly talented.

Navdeep Saini, who has had a good season with the ball, could be rested in place of his Delhi team-mate, Khejroliya, who played a handful of games for RCB last season.

Despite losing Jos Buttler, Jofra Archer and Ben Stokes, Royals managed to win their previous game with the likes of Liam Livingstone and Oshane Thomas putting in solid performances alongside Sanju Samson, Riyan Parag and Ajinkya Rahane. There is no reason for them to change the 11 barring any injury concerns. 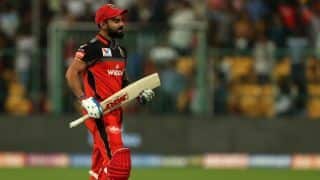