Bangalore were in command of the run-chase at 86 for two in 12 overs.

Royal Challengers Bangalore (RCB) were in firm control over the run-chase against Delhi Daredevils (DD) in the second match of the Indian Premier League (IPL) 2014, with Yuvraj Singh replying in the perfect fashion against the stone throwers and skipper Virat Kohli looking in ominous form at the crease.

In the early overs, Parthiv Patel’s swashbuckling knock gave Bangalore early honours in the match. Yuvraj was treated to some short pitched stuff from Mohammad Shami that produced mixed results for the southpaw. First came a wild heave that didn’t connect the bat and a hook nearly found first slip.

Yuvraj then tore into off-spinner Rahul Sharma. A smashing six over deep-mid wicket was followed by a tremendous straight drive but it was cut off well at long-off.

Earlier, Bangalore captain Kohli won the toss and decided to send Delhi Daredevils in to bat. After some inspired bowling from Bangalore in the early overs, which restricted Delhi to 37 for four, Ross Taylor and JP Duminy put on an inspired batting display to take Delhi to 145 for four. 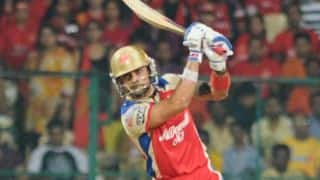 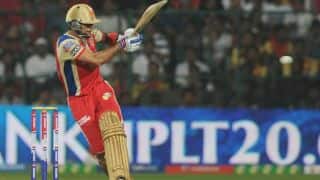