Desert T20 2017: UAE win a thriller against Namibia by 6 wickets

Desert T20 2017: UAE win a thriller against Namibia by 6 wickets

UAE won their first game in Desert T20 2017 in dramatic fashion at Sheikh Zayed Stadium in Abu Dhabi on Sunday.

UAE won their first game in Desert T20 2017 in dramatic fashion at Sheikh Zayed Stadium in Abu Dhabi on Sunday. It should have been a cakewalk for UAE once Rohan Mustafa and Shaiman Anwar registered their fifties and put them on course, but panic struck, and UAE s win over Namibia had to wait till the last ball. Even with a single run to score from the last 2 balls UAE almost managed to mess it up, Shaiman skying a ball and running for no reason, only to be run out by Gerhard Erasmus. Thankfully, No. 11 Muhammad Usman kept his cool and pushed Jan Frylinck over mid-on to seal the match.

Earlier, Namibia s all-round batting display took them to 152 for 7. Winning the toss, Namibia lost openers Louis van der Westhuizen and Stephan Baard by the third over. Both men were bowled by Mohammad Naveed. Craig Williams did not last either, falling to Ahmed Raza after two boundaries. The onus fell on Jean-Pierre Kotze and Erasmus, former captain of Namibia Under-19. They added 35 runs for the fourth wicket before Erasmus went for a slog, missed the line, and was bowled. Thus, the first four Namibian wickets to fall were all bowled.

At this stage captain Sarel Burger joined his wicketkeeper Kotze. Both Sarel and his brother Louis had played for Namibia in World Cup 2003. He used all his experience, running his singles hard and finding the odd boundary. Kotze and Burger added 62 in a mere 47 balls before Kotze was bowled by Zahoor Farooqi. Burger fell two balls later, but some slogging helped Namibia add 19 from the last 2 overs. Kotze s 50 came off 42 balls, while Burger got 32 in 25.

In response, UAE provided flourishing start as openers Mustafa and wicketkeeper Ghulam Shabber adding 31 runs for the opening wicket in a mere 4 overs. Though Shabber fell to Frylinck in pursuit of a six, Shiaman and Mustafa calmed the storm and pushed UAE towards the shore.

The partnership broke when Shaiman drove Colin Peake back, and the ball touched his finger to hit the stumps at the bowler s end. Mustafa was caught short of the crease. His 56 had taken him 34 balls. Rameez Shahzad held one end up, letting Shaiman do his job; and when Gerrie Snyman (another World Cup 2003 veteran) ran out Rameez with a throw from the cover fence, UAE needed 15 from 11 balls.

Usman lofted the next ball from JJ Smit for four, bringing the target down to 11 from 10. The next four balls fetched a single each, and UAE needed 7 from the last over. The first four balls yielded two singles and two twos, but Shaiman fell next ball (for a 53-ball 53) though Usman kept his cool and finished things off nevertheless. 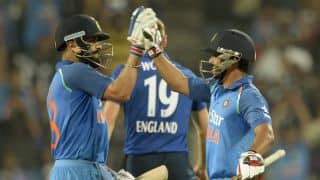