Don't see much logic behind the one-day postponement of BCCI elections: Diana Edulji

Don't see much logic behind the one-day postponement of BCCI elections: Diana Edulji

Edulji is set to meet Amicus Curiae P.S. Narasimha on Thursday and will discuss the decision to shift the date of BCCI elections by a day to October 23.

The Supreme Court-appointed Committee of Administrators member Diana Edulji is set to meet Amicus Curiae P.S. Narasimha on Thursday and not only apprise him of the functioning of the Board of Control for Cricket in India (BCCI), but also discuss the decision to shift the date of BCCI elections by a day to October 23.

She has made it clear that while her co-members in the committee wanted a two-week delay in elections, she stood ground and was against the move.

Speaking to IANS, Edulji said that there was really no need to postpone the election even by a day due to the assembly elections in Haryana and Maharashtra.

“Don’t see much logic behind the one-day postponement because in that case why wasn’t the date of counting also taken into account? Then, you could also look at Diwali coming up. Really didn’t make sense to me. As for my meeting with the Amicus, initially we were all expected to meet together, but I am told Vinod Rai is out of town. The appointment was for Thursday and I am going to meet the Amicus and it will be a general interaction on the way things are to be taken forward and I will apprise him of the situation in the board as well,” she said.

“Initially they wanted a two-week delay, but I didn’t agree on that.”

Rai on his part informed the media on Tuesday that all talks of the CoA looking to defer the election was wrong and that the BCCI polls had been postponed by a day owning to state polls.

“The BCCI elections are on track. It’s just because of the state polls, we have decided to reschedule by a day. So it will now be held on October 23 instead of October 22,” he had said.

With the Supreme Court allowing Tamil Nadu Cricket Association (TNCA) to hold elections to the post of Assistant Secretary and further directing that disqualification shall be confined only to those who had held the post of “Office Bearers” of the cricket associations, the CoA on Tuesday modified the clarifications they passed on September 16 and also extended the deadline to complete state elections to October 4.

State associations though have made it clear that the SC and not the CoA have the right to take a call on the validity of the elections of the state bodies. 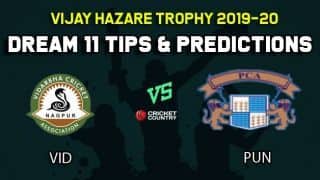