Former England captain Alastair Cook officially received knighthood from the Queen during a special investiture ceremony at the Buckingham Palace on Tuesday. Cook becomes only the 11th Englishman to be knighted for services to cricket.

“It has been such a special day. I can’t put into words what it means, because I am not very good at that, but just for my family it has been a very special occasion,” the 34-year-old Cook was quoted as saying by Sky Sports.

“I am very lucky to have this at the end of my international career. I don’t think I will ever get used to seeing my name with a Sir before it, you never get used to it. It is just weird, when you are told you have to just walk and kneel, that you should get so nervous. (ALSO READ: Sir Alastair Cook receives knighthood at Buckingham Palace)

“I have played cricket in front of many thousands and done okay but you get just as nervous just walking and kneeling, which is very strange.”

Cook, who captained England in 59 Tests and won four Ashes series, hung his boots in his 161st Test at The Oval in September last year. However, he refused to rule out the possibility of a comeback.

“You can never say no totally, because you don’t know what will happen in the future,” said the southpaw, who amassed 12,472 runs for England. (ALSO READ: Alastair Cook believes England can end World Cup disappointment this year)

“I had an amazing 12 years and had times and experiences which I could never repeat. The way I finished at The Oval was special, that will be my memory of wearing the three lions more times than I ever thought I would.

“That cap will stay in the drawer, but I will look back with great memories of it. I can look back smiling with no regrets.” 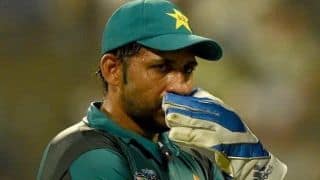