England have added Craig Overton to their Ashes squad for the fourth Test that starts from September 4 at Old Trafford.

England have added Somerset pacer Craig Overton to their 13-man Ashes squad for the fourth Test against Australia starting September 4 while veteran James Anderson has been ruled out of the series after failing to recover from a calf injury.

Overton is the only addition in an otherwise unchanged squad that was named for the third Test at Headingley which England went on to win by one wicket thanks to Ben Stokes’ stunning unbeaten century. The win helped the hosts draw level at 1-1 in the five-match series after they lost the series opener in Edgbaston and the second Test at Lord’s ended in a draw.

READ: Anderson out of remainder of Ashes due to calf injury

Overton has played three Tests and one ODI for England with his last international match in June 21, 2018 – his ODI debut against Australia at Chester-le-Street in which he bowled seven wicketless overs for 55 runs.

Two of the right-arm pacer’s three Tests have been against Australia in Adelaide and Perth from which he took six wickets. His third Test was against New Zealand in March last year where he returned figures of 1/70.

England have persisted with opener Jason Roy who has had a horror start to his Test career having managed 57 runs across six innings with 28 being his highest score. 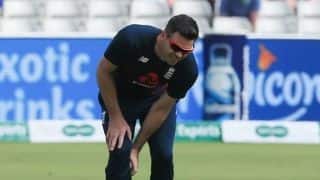