England were beaten by 199 runs in the second Test against New Zealand at Headingley.

England captain Alastair Cook insisted his side could yet regain the Ashes despite being held to a 1-1 Test series draw by New Zealand. Australia thrashed England 5-0 on home soil during the last Ashes clash in 2013/14. However, Australia will arrive for a Test series against England starting in Cardiff on July 8 having not won an away Ashes campaign since 2001. READ: New Zealand square series against England with a 199-run win in 2nd Test at Headingley

England, though, went down to a crushing 199-run defeat by New Zealand in the second Test at Headingley on Tuesday. But for Cook’s superb 162 and a dashing century by all-rounder Ben Stokes, England might well have also lost the first Test at Lord’s — a match they won by 124 runs.

Asked if he thought England could regain the Ashes, Cook told reporters at Headingley: “Yes I do.  “In our conditions as well, we’re comfortable in them but we have to make that step forward as a side and we have to do it quickly,” he added.

But for the second series in a row, following their five-wicket defeat by the West Indies in Barbados last month, England let slip a 1-0 lead to end a Test series level at 1-1.  “To win a Test series or a Test match, you need to win those crucial moments,” said Cook. VIDEO: Alastair Cook believes England’s loss to New Zealand in the 2nd Test at Headingley was frustrating

“We’re just probably lacking a little bit of that,” added Cook, with England made to pay for dropping several slip catches at Headingley.

England started Tuesday’s final day on 44 without loss, chasing what would have been a Test record fourth innings winning total of 455. But they lost five wickets before lunch and were eventually bowled out for 255, with Cook (56) and Jos Buttler (73) providing the only significant resistance.

“To lose four wickets pretty early on made it fairly clear that we weren’t going to go for it,” said Cook, who reached exactly 9,000 Test runs with his second-innings effort.

Of particular concern to England ahead of the Ashes was the form of top-order batsmen Gary Ballance and Ian Bell, both of whom saw their lean run continue on Tuesday with single-figure scores.  Ballance and Bell were among a group of Test regulars who were left out of England’s squad for the upcoming one-day series against New Zealand. READ: Brendon McCullum: New Zealand cannot eclipse rugby team despite massive win

Cook himself was dropped from England’s 50-over set-up prior to the team’s humiliating first round exit at this year’s World Cup. The experience appeared to benefit Cook’s Test form, with the left-handed opener ending his near two-year wait for a Test hundred in the Caribbean.

“Clearly they haven’t scored the runs that they would have liked to have done, and they’ve got five weeks away to go away and find a bit of form in county cricket,” said Cook of Ballance and Bell. READ: Aggressive New Zealand find an orthodox hero in BJ Watling

The captain was also confident the struggling Moeen Ali could recapture the form that saw the off-spinner take 19 wickets at 23 at home to India last year. “What I do like about him, he does spin the ball hard, he gets a lot of revs on it, so if he can get that control back like he had against India we know he can be a threat,” Cook said. 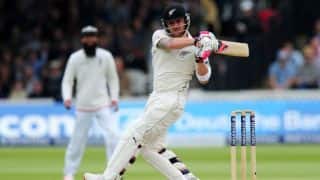