Wayanad: England Lions overcame a mid-innings stutter to reach 303 for 5 at stumps on day one of the first unofficial Test against India A on Thursday.

Sent into bat by home skipper Ankit Bawne, the Lions got off to a solid start with openers Ben Duckett (80) and Max Holden (26) sharing a 82-run stand in 23.3 overs. Duckett, in particular, played with a lot of assurance as the visitors negotiated the opening hour without any loss. (ALSO READ: Rahane to lead ROI in Irani Cup, KL Rahul named India A captain in 2nd game vs England Lions)

Navdeep Saini struck the first blow in the 24th over when he had Holden nicking a delivery to keeper KS Bharat. Sam Hain then joined Duckett and added 44 runs before the opener was bowled by Shardul Thakur with a delivery that came in. Duckett hit 15 fours during his 118-ball knock.

Hain held fort even as Test discard Ollie Pope (8) and captain Sam Billings (9) fell with India A fighting back. Kerala allrounder Jalaj Saxena then ended Hain’s 167-ball vigil, having him caught behind for 61.

Steven Mullaney (39) and Will Jack (40) then defied the India A bowlers, mixing defence with some attractive shots, to add 65 runs for the unbroken sixth wicket partnership.

Saini was the best bowler for the home team with 2 for 57, while Thakur, Saxena and Avesh Khan scalped a wicket each. 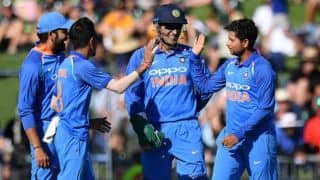 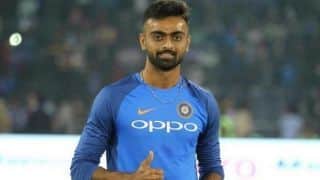