Woakes joined Ben Stokes on the sidelines through injury when he suffered a thigh strain in England's victory over Pakistan in the second Test.

England called up Nottinghamshire seamer Jake Ball as cover for the injured Chris Woakes in their squad to face Australia in a five-match one-day series this month. Woakes joined Ben Stokes on the sidelines through injury when he suffered a thigh strain in England’s victory over Pakistan in the second Test. Both will be unavailable to take on Scotland in Sunday’s one-off one-day international and for the “first part” of the series against Australia.

Ball played the last of his 17 ODIs to date at Perth in January in the 4-1 series victory over Australia. He has taken 21 wickets, with a best of five for 51, but averages 45.28. “Nottinghamshire seamer Jake Ball has been drafted into England’s ODI squad for the Royal London series against Australia as cover for all-rounder Chris Woakes,” the England and Wales Cricket Board said in a statement.

“Woakes, who will be unavailable for the first part of the series with a right quad strain, joins Ben Stokes (left hamstring tear) on the injured list. “Both players have commenced their injury rehab programmes and will be hoping to respond to treatment with the aim of featuring in the latter stages of the series.” 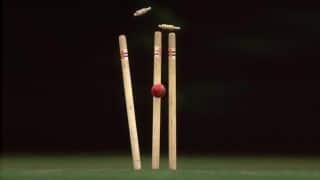