Now he is aiming to enjoy more red-ball success in what will be the 100th Test.

London: New Zealand‘s Tim Southee will return to the scene of one of his greatest triumphs on Thursday for the first Test against England at Lord’s.

Two years ago, the swing bowler gained a coveted place on the Lord’s honours board with a match haul of 10 for 108, only for New Zealand to suffer a crushing 170-run defeat as they were dismissed for just 68 in their second innings en route to a 2-0 Test series loss. READ: Geoffrey Boycott slams England cricket; terms it ‘shambolic’

But Southee was on the winning side in February when his stunning seven-wicket haul set up a crushing victory for the Black Caps over England at Wellington during a World Cup where co-hosts New Zealand made it all the way to the final before losing to Australia.

Now he is aiming to enjoy more red-ball success in what will be the 100th Test between England and New Zealand. The tourists have won just four of their previous 52 Tests in England. READ: England cricket fans will be reunited if England beats New Zealand: Stuart Broad

Since their last visit in 2013, New Zealand have won four and drawn two of their subsequent six Test series but they will go into Thursday’s match with half their squad, including Southee and dynamic captain Brendon McCullum, having only just arrived in England after stints in the Indian Premier League (IPL).

“It’s always nice to come back to a ground where you’ve had success. But you start on zero again on Thursday,” said Southee. READ: New Zealand could add to England’s woes believes Richard Hadlee

With England’s top order having been exposed during their recent third Test defeat by the West Indies in Barbados, the sacking of coach Peter Moores and the installation of a new management team — all against the backdrop of the controversy surrounding Kevin Pietersen‘s ongoing international exile — many pundits have forecast a series win for the tourists in this two-match contest.

Southee was, understandably, more cautious, saying: “They [England] are coming off a Test series [drawn 1-1 in the Caribbean] where some of the guys performed very well. What happened in the World Cup happened, and I’m sure they’ll learn from that.” READ: England scared of terrific twins, Tim Southee and Trent Boult: UK media

Southee and left-armer Trent Boult have, for several years now, formed a potent pace attack. But the key to how New Zealand perform in this two-Test series is likely to rest with their top-order batting.

But he was the leading run scorer at the World Cup, where his tally included a tournament record 237 not out against the West Indies.

The top of the order has been a problem area for England too, although captain Alastair Cook did end his near two-year wait for his 26th Test hundred in the West Indies.

But while England have remained loyal to Cook, Yorkshire‘s Adam Lyth will become the captain’s sixth opening partner in three years should he, as expected, make his Test debut on Thursday following the retirement of Jonathan Trott. READ: Adam Lyth hopes to make Test debut for England against New Zealand

Meanwhile there are fears England’s attack has become over-reliant on James Anderson, now England’s leading Test wicket-taker of all-time, with Stuart Broad, who sparked New Zealand’s collapse at Lord’s two years ago, a bowler of fits and starts.

Broad, for his part, was in no doubt about the importance of Thursday’s match ahead of England’s home Ashes series with Australia. 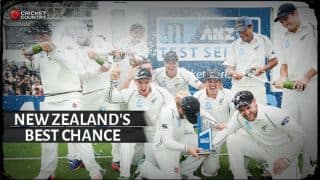