A day after Lord's win, England coach Trevor Bayliss confirmed that they changed their team composition by adding a fourth seamer, in the last minute looking at the conditions. And that begs the question, why didn't India do the same?

Talks about the heatwaves and drier conditions at Lord s for the second Test against India and England dominated the build-up to the Test, and it seemed almost certain that both teams would pick two spinners.

India did eventually played with two spinners to go with three seamers, while England went with four seamers and routed India under swing-friendly conditions by an innings and 159 runs.

A day after, England coach Trevor Bayliss confirmed that they changed their team composition by adding Chris Woakes as their fourth seamer, in the last minute looking at the conditions.

We were all set to play the second spinner in this match if conditions suited but with the weather around, we didn t have to make that decision, said Bayliss as quoted by the Belfast Telegraph.

We went with the extra quick, and it worked out, he added.

And that begs the question, why did India not do the same?

Both teams had ample time to assess the conditions as the first day of the Test was washed out without the toss. That meant both teams had the opportunity to change their initial plans, but the Indian team didn t as they rested Umesh Yadav in place of wrist spinner Kuldeep Yadav. While England did not even employ their lone spinner, Adil Rashid, in the match, Kuldeep bowled only nine overs in England s only innings.

India s muddled team selection had already come under the scanner after the first Test in which Cheteshwar Pujara not named in the XI with KL Rahul, an opener, drafted in his place. India also persisted with Shikhar Dhawan in the first Test despite the Delhi batsman recording a pair in the tour match.

While Dhawan was dropped for the second Test, Rahul, bumped up to the opening slot only managed eight and ten in the Lord s Test. 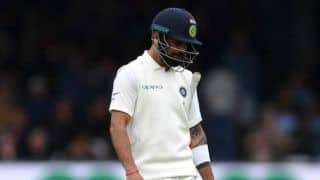