The Women’s Ashes series will start on July 21 with the first ODI at the County Ground in Taunton.

The England and Wales Cricket Board (ECB) on Monday announced the England women’s squad for the three Women’s Ashes One-Day Internationals (ODIs) to be played against Australia this month. The England’s Women’s Ashes Test squad will be announced after the conclusion of the ODI series.

Charlotte Edwards will be leading England with an eye on her third consecutive Women’s Ashes series victory in the multi-format series. Vice-captain Heather Knight is looking forward to her 50th ODI cap with the first ODI to be held at Taunton on July 21. READ: Charlotte Edwards’s feat goes unnoticed

ECB Director of England Women’s Cricket, Clare Connor, said,  “I don’t think it’s too dramatic a statement to say that the 2015 Women’s Ashes contest is possibly the most eagerly anticipated series in the history of international women’s cricket. The pace at which the women’s game is evolving at the moment is extraordinary.  This summer for the first time ever, we will see two fully professional international women’s teams in action, with live broadcast coverage of every single ball, including the Kia Women’s Test match, on Sky Sports and BBC Radio.” READ: England women’s cricket team sign standalone deal

“It is this level of exposure and support that will ensure that the women’s game continues to grow, and that will inspire women and girls everywhere to play the game.” READ: England announce high-profile T20 competition for women

“England’s 14-player squad named for the first three Royal London ODIs is one of real strength and demonstrates the depth of talent currently running through the England women’s performance programme. I am delighted to see a return for Georgia Elwiss, who has been in superb form with both bat and ball for a while now, and thoroughly deserves her opportunity.”

The Women’s Ashes series will start on July 21 with the first ODI at the County Ground in Taunton. The second ODI will be held at the Bristol County Ground on July 23. The third and final 50-over match takes place at Worcestershire’s New Road on July 26.

Moreover, the three ODIs will be crucial keeping in mind that they will be accounted for the third round of fixtures for both the teams in the lead up to the ICC Women’s Championship, which also determine the qualification for ICC Women’s World Cup 2017 to be held in England.

The Women’s Ashes is a multi-format consisting of three ODIs, one Test and three T20Is. Two points are handed to the winning team in each of the ODIs and T20Is and four points are handed for the winner of the Test match. Points are divided in case of a drawn Test. 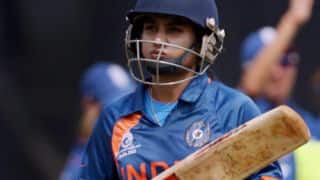