Nkwe, 36, has a good record as coach of Highveld Lions in domestic cricket.

Cricket South Africa (CSA) have named their interim team director for the tour to India in September-October, appointing Enock Nkwe until a replacement for former coach Ottis Gibson is identified.

A former allrounder who played 42 first-class, 38 List A and nine T20 matches, Nkwe most recently served as head coach of Johannesburg-based domestic franchise Highveld Lions. Under his tutelage, the Lions won the CSA T20 Challenge and 4-Day Franchise Series.

Last week, CSA sacked Gibson and the entire coaching staff after the team finished seventh at the World Cup. Until CSA can identify Gibson’s replacement, Corrie van Zyl has been named as acting Director of Cricket. Among van Zyl’s immediate tasks is to put together a coaching staff to take South Africa to India in September for three T20Is, followed by three Tests in October.

That has begun with the appointment of Nkwe, who has been given the freedom to select his coaching staff for the India tour.

It was also announced that CSA will opt for a football-style management setup where there will be a team manager who will select his own coaching staff and captains in the three formats of the game. 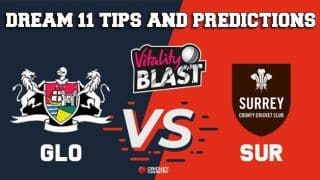