Durable. That is the word one associates with Hashim Amla, who on Thursday announced his retirement from international cricket.

His zen-like presence at the crease is what most people will remember Amla for, but being durable is perhaps Amla’s legacy. He changed perceptions, he broke records, he carried his team through many tough times. He wasn’t cut out for the captaincy, as it panned out, but as a batsman Amla left his mark on international cricket.

He is a South African sporting icon. The bearded wonder. ‘Hash’. A legend of the game, who retires from international cricket as South Africa’s second-highest run-scorer in Test cricket after Jacques Kallis, with 9282 at 46.64, and his 28 centuries are also second to only Kallis. His career-best 311 not out at The Oval in 2012 is South Africa’s only Test triple-hundred.

Belligerent back-foot play and supple wrists is what Amla probably inherited from India when his paternal grandfather migrated to South Africa from Gujarat. That, allied with sublime footwork and sage-like discipline, turned the soft-spoken Amla into a world-beater.

Talked of as a fine talent when a teenager, Amla led South Africa to the final of the 2002 Under-19 World Cup final. There was plenty of expectation from him because of what it meant for a young Muslim, Asian-origin to captain a country like South Africa. Amla got several starts in the tournament but did not always convert, except for fifties against Bangladesh in the opener and India in the semi-final.

At the age of 21, he led Natal in South African domestic cricket and backed it up with four hundreds in his first eight innings. After stacking up runs for Dolphins, Amla earned a Test cap in 2004-05 but had a mediocre series in India and then was was exposed by England’s pace attack. He made 36 runs in four innings and questions were raised about his technique and defensive style of play. He was, not surprisingly, dropped.

But at 22, Amla had age on his side and when handed a second chance 15 months later, he scored a Test hundred against New Zealand (149 at Cape Town). Another lean spell followed five fifties in his next 23 innings – but persisted with against New Zealand a second time, Amla registered scores of 176 not out and 103. This time there was no looking back, and Amla’s ascendency as the lynchpin of South Africa’s batting in Tests was official.

A serene 159* in Chennai in 2008 was memorable for Amla’s deft touch and effortless cover-driving, and later that summer he made it to the honours’ board at Lord’s with a match-saving 104 which reaffirmed his position as one best batsman in the world.

(READ: Where have all the quality No 3 batsmen in Tests gone?)

That same year Amla also made a low-key ODI debut versus Bangladesh, against whom he scored his first century in the format (140) in November 2008. That innings marked Amla’s reinvention as a limited-overs batsman and he followed it up with a string of half-centuries in Australia and at home in 2009.

The year 2010 was Amla’s. Tallying over 1000 runs in Tests and ODIs, which included four centuries and five fifties in 15 ODIs at a good strike-rate, he was nominated for ICC Cricketer of the year, ICC ODI player of the year and in the People’s Choice category. In India, Amla scored 409 runs in two Tests and was dismissed just once.

In 2012, at The Oval, Amla became the first South African to reach 300 in Test cricket. That year he topped 1000 runs in Tests at an average touching 71, with that unbeaten 311 at The Oval followed by two more hundreds – including 196 in a famous win at Perth – to end 2012 on a high. He did well in ODIs too in 2012, averaging 84.75 with a sequence of scores that were not only consistent but helped South Africa to victory.

Sample his innings in 2012: 112, 55, 8, 92, 76, 150, 43, 45 and 97*. Then understand that of those nine matches, South Africa won seven. Both of Amla’s centuries fashioned wins, as did his unbeaten 97 at Trent Bridge. In the two games South Africa lost, Amla averaged 44. All year he batted with a fluency and authority that belied his composed, sage-like presence at the top of the innings.

The year 2014 was another excellent year for Amla in ODIs, his second best since 2011 (1058 runs in 15 innings). He played a major role in South Africa winning four out of the five ODI series played in 2014, scoring centuries in each of them. He began the year with back-to-back hundreds against Sri Lanka (109, 101) in a three-ODI series and continued his glorious form in the tri-series in Zimbabwe, where another century and two half-centuries followed. Amla’s only century in a losing cause came in the fourth ODI at Canberra and although South Africa couldn’t end the year on a winning note, he was one of the most prolific openers of the 2014.

Like a few other illustrious batsmen before him, Amla did not make a mark as captain. The start was positive, with a Test series victory in Sri Lanka and then against West Indies at home, which saw Amla scored a double-century. But matters turned a corner sharply. South Africa were beaten 0-3 in India to lose the Test No 1 tag, and then at home were beaten by England. Amla’s batting dipped, and he relinquished the captaincy.

Having decided to do so, he promptly scored a Test double-century.

Amla played three World Cups in 2011, 2015 and 2019. In 2011, South Africa were beaten in the quarter-finals and in four years later they were eliminated in heart-breaking scenes at Eden Park by hosts New Zealand. In 2019, they were a complete failure.

At one stage Amla looked set to exit the stage with Test and ODI averages in excess of 50, but it was not to be. Since the start of 2018, he averaged 33.36 in Tests with two centuries – both against Bangladesh in successive matches. He scored only 51 runs in four innings in South Africa’s shock Test series loss against Sri Lanka earlier this year, in what proved to be his final act in Tests.

In ODIs over the past two years, Amla averaged 44.10 from 25 innings, a figure bloated by four unbeaten innings of 110, 108, 41 and 80. That 80 came in his final ODI, against Sri Lanka at Chester-le-Street in South Africa’s last match of dismal World Cup.

Should he have gone to the 2019 World Cup? Probably not, though like Dale Steyn it was a romantic notion to have one last shot at winning that elusive trophy. After South Africa were beaten by England in the World Cup opener, during which Amla copped a blow to the helmet from Jofra Archer, he and Steyn turned up at The Rose Bowl two days before the match with India.

Steyn was trying his damnedest to prove his fitness, and Amla was there to show he was not too damaged by Archer’s blow. Personally, Steyn and Amla, and collectively, as a team, South Africa were in a tough spot. Thus the commitment of Steyn and Amla on a warm afternoon spoke of their desperation to get back into the XI and help their team.

That was the lasting impression of Amla – a trier, a perfectionist, the pivot of the South African team.

The final words of Amla’s retirement announcement were “Love and peace.” Indeed, when Amla was at the crease and in his element, those are the two words you felt watching him. 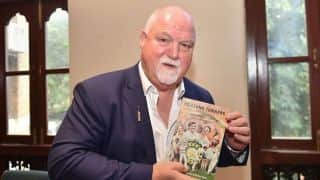