CricketCountry speaks to Dean Jones, Sanjay Manjrekar and Aakash Chopra while trying to assess the situation regarding Test one-downs.

Join the words Test No 3 together and what comes to mind? Ricky Ponting? Brian Lara? Rahul Dravid? Kumar Sangakkara? David Boon? Jacques Kallis? Ian Chappell? Don Bradman, for anyone who can recall how many times the Australian icon batted at one-down? Probably several more, for cricket aficionados.

Indeed, the No 3 spot in Test cricket has traditionally been reserved for the best batsman in a team. The aforementioned names have heaps of runs at No 3, across the globe, and for countless cricket fans the mere mention of the likes of Ponting, Lara, Dravid and Sangakkara will conjure up images of epic innings, moulded from hours of concentration, class and cover-driving coated with crispness (or, in Sangakkara s case, an achingly remorseless appetite).

In the last five years, the five most successful batsman have been Joe Root, Steven Smith, Virat Kohli, David Warner and Alastair Cook, who in September bowed out of Test cricket with a century and 12,474 runs. Of these, Root and Smith have batted at No 3 the most but are not permanent one-downs for their respective teams. Warner and Cook are openers, Kohli a bonafide No 4.

The sixth most successful batsman since 2013 is Cheteshwar Pujara, but his struggles away from Asia – he has just two Test centuries when travelling outside the continent – still leave the jury out on where he slots in as a proper No 3. Which leads to the question of why there are no current No 3 batsman who evoke the level of respect and fear that Lara, Ponting, Dravid, Sangakkara and Kallis did.

A cursory glance around the current Test batting landscape does indicate that several teams have a current problem with their one-down selections. Setting aside the name of banned former Australia captain Smith, who has scored 1744 of his 6199 career Test runs batting at No 3, an average of 67.07, the teams will sustained success across the globe are limited.

The most successful No 3 batsman over the past two years is India s Pujara with 1823 runs at 50.63 and six hundreds and nine fifties. However, closer inspection reveals that in this time, 1137 of those runs have come in India (three hundreds), 309 in Sri Lanka (two hundreds) and 377 at 31.41 across seven Tests in South Africa and England. Overall, in his 64-Test career, Pujara averages 64.40 in Asia (13 hundreds) and 29.38 outside of Asia (two hundreds).

Next best is South Africa s Hashim Amla, a world-class batsman with runs across the globe, but who in the last two years averages 37.77 in 36 Tests innings. Amla s decline has been attributed to his age – he will be 36 in March and slowing reflexes. Amla is still widely viewed as South Africa s most valuable wicket, and with 7733 career runs batting at No 3, where he has scored 25 of his 28 Test centuries, he can rightfully be viewed as the best No 3 of the current era.

New Zealand captain Kane Williamson – along with Root, Virat Kohli and Smith – is widely considered as one of the best four batsman today. However, a dearth of Test matches has seen Williamson play just 11 times in the past two years. He averages 50.62 in this time with four centuries, each of those 11 Tests coming in New Zealand. As skilled as Williamson is, his value will be judged on how he fares away from home, but it would be unfair to judge him when his team has not travelled for two years.

Usman Khawaja has not been able to nail down a permanent batting spot in Australia s batting lineup. He averages 31.27 across 22 Tests innings at No 3 over the past two years, but most recently was promoted to open in the UAE on account of the absence of Cameron Bancroft and David Warner and a scarcity of options.

The No 3 spot has been England s problem position for some time. Since the retirement of Jonathan Trott – who scored 3109 runs at 45.72, with seven hundreds, while batting there – the selectors have used Root, James Vince, Nick Compton, Tom Westley, Gary Ballance and Moeen as options. Vince managed 336 runs in six Tests, Compton 266 in seven, Westley 193 in five and Balance 85 in two.

Root vacated the role ahead during the fourth Test of England s home summer, after scoring 314 runs in 11 innings from that spot in 2018. Root had moved up a spot for the Auckland Test in March, where he scored 0 and 50, having last batted that high in December 2016. Batting at No 3, Moeen made 9, then 50 and 20 at The Oval and now 0 and 3 in England s win in Galle before being jettisoned back down the order.

The latest to front up for the challenge of batting at one-down in Test cricket was Ben Stokes, pushed into the role for the first time as England chose to bat on day one of the second Test against Sri Lanka at Pallekele. Stokes has most often batted at No 6 – he played 64 of his 85 Test innings at that spot – and there was talk until the day before the second Test that Jos Buttler would play at one-drop. Buttler himself said he was ready for the challenge, but one match eve it was confirmed that Stokes would bat at No 3.

The left-hand batsman was out lbw to Dilruwan Perera for 19 off 27 balls as England slumped to 44/2. Root, the England captain who until March was a regular at No 3, was the next to fall at 65/3Sri Lanka are the biggest hit since the retirement of Sangakkara in 2015. Since he bowed out of international cricket, the selectors have used 10 specialist batsmen at No 3, with not a single one managing long-term success. Kusal Mendis has been the most successful with 779 runs at 35.40 from 13 Tests, followed by Dhananjaya de Silva with 484 at 40.33 from nine.

Pakistan too have struggled to fill the void created by Younis Khan dropping down to No 4 in 2014 until his retirement in 2017. Since then, Azhar Ali has got the most chances at No 3, scoring 1160 runs at 46.40 from 25 innings, with three centuries. He opened in England this summer and then batted at No 3 against Australia in the UAE last month, so clearly Pakistan do not have a proper one-down option. Babar Azam has 337 runs at 25.92 from 15 innings with a best of 90* at No 3, crossing 50 just thrice. Asad Shafiq averages 39.60 from No 3 in threeTests, followed by Haris Sohail (30.40 in three).

Young Bangladesh talent Mominul Haque is a vital player for his team, but after scoring three hundreds in his first seven Tests his batting tapered off. He began 2018 with twin centuries against Sri Lanka at Chittagong, but then went eight innings without crossing 33, and during the ongoing Test against Zimbabwe made 161 and 1. West Indies seem to have perennial batting issues be it openers, one-down or in the middle order. Not since Darren Bravo played the last of his 49 Tests in 2016 has any West Indian No 3 averaged more than 31.

Is it a case of not enough quality batsmen with good defence techniques against seam and spin? Are teams increasingly preferring to play their better batsman at No 4? Is the standard of batting falling overall?

Former Australia batsman Dean Jones, who batted at No 3 in 17 of his 52 Tests and averaged 48.62 in doing so, believes the mindset of big batsmen has changed against the decline of batting in Tests.

I think it has to do with the falling standard of Test cricket, and the agronomy of pitches around the world, which are dropping, but I dare say that batsmanship is not what it used to be, he tells CricketCountry. We ve all been brought up knowing that your best batsman bats at No 3. Everybody wanted that position. For some reason, I think people are quite happy batting at 4 and 5. I think they don t to face the new ball or the reverse-swinging ball, so they re happy batting 4 and 5. That s where its come to and its a bit sad in a way.

I hated being dropped from the No 3 position. You ve got to able to come in at 0/1 and 100/1 and hit the ground running. When I was growing up, everybody wanted to be No 3. Ian Chappell was No 3. For some reason, everyone now wants to be No 4. Is it because Virat Kohli bats at No 4? I don t know. Maybe the art of batting is not what it used to be. There aren t any standout bowlers out there with the new ball, are there? The Kookaburra ball is not swinging either.

Since 2013, the most successful opening pair has been Chris Rogers and Warner who put on 1989 runs in 37 innings for an average of 52.72, with eight century stands. But they have not batted together since Rogers retired in 2015.

After them, Sri Lanka s Dimuth Karunaratne and Kaushal Silva made 1797 runs together in 56 innings for an average of 32.08. Next come Shikhar Dhawan and Murali Vijay with 1340 at 36.21 in 38 innings. Dhawan s poor form away from home saw him dropped, while Vijay was axed for the first time in his career after two horror Tests in England, including a pair at Lord s. Only one pair averages more than Warner and Rogers (with a minimum of 10 innings as the cut-off) and that is Warner and Bancroft who in 14 innings together scored 732 runs at 56.30. That kind of success, followed by Smith at No 3, is rare for Test top orders.

Former India Test opener Aakash Chopra feels it has to do with the health of opening combinations which often sees one-down batsmen in to bat early.

I think its starting with poor opening combos across the globe the No 3 is getting exposed too quickly and therefore, teams are finding ways to shield their best batsman by pushing him at No 4. It is one of the problems, he says. Also, the fact is that Test cricket isn t really flourishing at the moment and therefore, you d find similar fate at most batting positions. Root is a typical No 3, but with openers failing the way they have, its wise to move down the order. That is if you can afford it. He s the captain.

Manjrekar feels the situation is not helped by the approach of coaches. It is coaches who won t insists that the best batsman bat in the top four, he says Stokes at No 3? England have the most bizarre tactics.

Adds Jones: Your best batsmen should be able to move around the order like they do in T20s. Its not happening that much in Test cricket, which means that teams are not thinking like that. We saw it with Australia in the UAE recently, where [Aaron] Finch opened the innings, but he will bat at No 5 at home when India come over. Adaptability is key and not enough teams are able to do that. 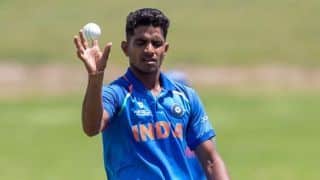 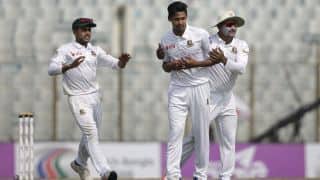