This summer, England host the World Cup and Ashes in succession.

Ahead of a summer headlined by the 2019 ICC Cricket World Cup and the Ashes, Eoin Morgan has called on England to seize a “once-in-a-generation opportunity” to make history.

England, ranked No 1 in ODIs, are a country that have never won the World Cup – their only ICC silverware, in fact, is the 2010 World T20 – and last year surrendered the Ashes to Australia. (READ: Pant and Russell sizzle, Bangalore fizzle)

The World Cup starts May 30 with Morgan’s team meeting South Africa, and after the showpiece event comes the Ashes where Joe Root will lead England.

“The two teams are building up to a big summer, and you have guys who are in both squads that equally feel the importance of the Ashes and the World Cup,” Morgan told the Press Association over the weekend. “The recognition from those players to say there is not a lot of difference between the two, and that it is a massive year, and a once-in-a-generation opportunity, shows there has been a shift in emphasis to one-day cricket in this country.

“Our potential as a team over the last four years has certainly moved forward, with the desire to make 50-over cricket a priority, as opposed to an afterthought. That has really benefited not just our team, but the game too, and that has helped to raise the bar.”

Under Morgan, England surged to No 1 in ODIs following a dismal showing at the 2015 World Cup. They are genuine World Cup contenders and the skipper was glad that some of his star team-mates such as Jos Buttler, Ben Stokes, Jonny Bairstow, Moeen Ali are currently involved in the Indian T20 League which in his view was the “ideal preparation” for this summer’s tournament. (READ: Rajasthan seek winning start at fortress)

“Stokes and Buttler will be guaranteed to play every game [for Rajasthan] until they have to report home,” he said. “The preparation they will have out there by competing against some of the best players in the world in a high-pressure environment is absolutely outstanding.

“The conditions, the build-up, and putting yourself under more pressure leading into the World Cup is obviously going to help in the long run. The tournament is ideal preparation for those England players that are involved.” 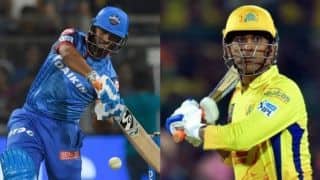