The ex-England speedster also said that Joe Root, who captains England in Test, and others have got a lot of respect for Morgan.

Harmison said that Morgan s ability to remain calm under pressure makes him favourite to succeed Bayliss, whose tenure comes to an end in September.

Following England s early exit in World Cup 2015, Morgan has turned the fortunes of the limited-overs side. So much so that currently the England side is the number one ODI team in the world and remain pre-tournament favourites to lift the 2019 ICC Cricket World Cup. (ALSO READ: Hopefully we can walk away with the ICC World Cup and Ashes trophy this year: Trevor Bayliss)

“I think Eoin Morgan is a magnificent leader, Harmison was quoted as saying by The Cricketer.

People laugh at me sometimes but when Trevor Bayliss is leaving after the Ashes, I’d give him the job. I’d want Morgan to lead England as coach, he added.

Harmison compared Morgan to Michael Vaughan, under whom England won the Ashes in 2005, beating Australia 2-1.

The ex-England speedster also said that Joe Root, who captains England in Test, and others have got a lot of respect for Morgan. (ALSO READ: Joe Root itching to win Ashes, but World Cup comes first)

“Joe Root and the players have got so much respect for him that I would have him in the setup in a leadership role because he’s calm and extreme pressure just doesn’t seem to bother him, said Harmison before adding, He’s a bit like Michael Vaughan in that aspect, he can make decisions under pressure clear, calculated decisions that are the right ones.

Hamison said that despite the highs and lows in Morgan s batting form, he never thought that the left-hander should not be a part of the squad and his leadership quality has a lot to do with it.

“There have been peaks and troughs in his batting, but I’ve never thought for one minute that he shouldn’t be in that side because his leadership qualities are so fantastic, said Harmison. (READ: Morgan channels once-in-a-generation opportunity for England)

“He’s going to be a big player for England over the course of the World Cup, and in the Ashes.

With the Ashes around the corner, Harmison felt that Root, who leads England Test team and will be playing under Morgan at the World Cup, will benefit dearly observing Morgan during the mega event.

“I think Joe Root will look at the way he leads during the World Cup, how he conducts himself and his decision-making under pressure.

“That’ll help Joe watching from extra cover or mid-on. It’ll educate Joe ahead of what will become a feisty summer with the Ashes at the back end, concluded Harmison. 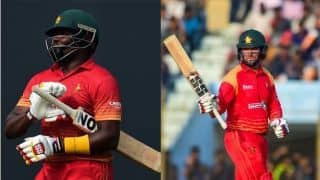