South Africa and Zimbabwe are going to play the maiden 4-day Test on the eve of Boxing Day (December 26).

South Africa captain Faf du Plessis is battling time to fully recover from his shoulder strain ahead of the historic four-day Test versus Zimbabwe , on Boxing Day (December 26). Du Plessis sustained a lower back injury during the Bangladesh home series. He was expected to be ruled out for six weeks. The 33-year-old has persisted with shoulder problem for sometime. Dr Shuaib Manjra, head of Cricket South Africa’s medical committee, confirmed that du Plessis’ injury is taking longer than expected to heal, but may still get a look-in for the one-off Test.

‘The medical committee will make a final decision’

“Faf is looking touch and go. He’s been included in a bigger squad for the Zimbabwe Test but we’ll have to make a decision closer to the time as to whether he will play. The medical committee will make a decision along with the convenor of selectors. We’ll have a broader discussion around it, but the medical committee will make a final decision. He’s expected to be okay for the India series – we still have about three weeks before the first Test. But we would like to get a game under his belt before that,” affirmed Manjra.

The four-day Test will be the first-of-a-kind to be played at Port Elizabeth. In addition, this will also be the first day-night Test hosted by South Africa.

All you need to know

The four-day Tests will comprise of 98 overs a day instead of the usual 90 overs. Extra half hour will be added to the playing time to accommodate for the ‘additional’ 8 overs. A total of 392 overs will be bowled contrary to 450 in five day Tests 58 overs less.

Lastly, for a team to enforce a follow-on in five-day matches, they need a lead of 200. This has come down to 150-run deficit in four days. 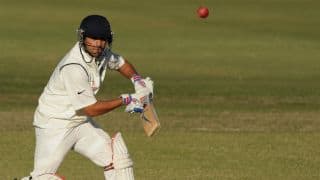