Feel more sorry for Rayudu than other cricketers who were not picked: Gautam Gambhir

Feel more sorry for Rayudu than other cricketers who were not picked: Gautam Gambhir

Gambhir, who has been Pant's first first-class captain, felt that this omission can't be termed a setback at all as he had not grabbed the opportunities presented before him.

Ambati Rayudu‘s omission from India‘s ICC World Cup 2019 squad after just three failures is “heartbreaking” but there should be no debate on Rishabh Pant‘s exclusion as he didn’t grab his chances, feels former India opener Gautam Gambhir.

Veteran Dinesh Karthik being favoured over Pant has been roundly criticised with Sunil Gavaskar calling it a surprising move. But the hero of the 2007 World T20 and 2011 World Cup final said Rayudu not making the cut is the most unfortunate bit about the squad announced on Monday.

“I think there should be no debate about Rishabh Pant’s exclusion but more about Ambati Rayudu,” Gambhir said on Tuesday.

“It is very, very unfortunate that someone averaging 48 in white-ball cricket and is only 33 has been left out. That for me is more heart-breaking than any other selection decision,” said the outspoken Gambhir. (ALSO READ: ‘Looking at Pant s form, I m a bit surprised that he s omitted’)

Rayudu was called India’s first-choice No.4 by captain Virat Kohli a few months ago but low scores in the home series against Australia last month led to a rethink by the selectors.

Gambhir was not picked for the 2007 World Cup in the West Indies and for a brief period contemplated quitting.

“I feel sorry for him as I was in a similar position in 2007, when they (erstwhile selectors) didn’t pick me and I know how difficult it is not being picked for the World Cup. Ultimately for any young kid, it is a childhood dream to be a part of the big event. So, I feel more sorry for Rayudu more than any other cricketer, who hasn’t been picked.” (ALSO READ: Ambati Rayudu’s dig at MSK Prasad after losing spot to Vijay Shankar)

However, Gambhir, who has been Pant’s first first-class captain, felt that this omission can’t be termed a setback at all as he had not grabbed the opportunities presented before him.

“This is not a setback at all. Why is it a setback? He has not consistently been part of white-ball cricket. He got his opportunity but unfortunately couldn’t grab it. So, it cannot be termed a setback,” said Gambhir.

Gambhir had captained a successful franchise side (Kolkata Knight Riders) for seven years. What does a captain tell a player in the midst of an IPL season when he takes such a hit? Can a player focus on the IPL?

“He (Pant) is playing Test cricket. He should be happy about it. And one thing I have tried to maintain is that you have got to stay in the present.

“You have age on your side, so just keep performing. He was never a part of white ball cricket consistently and it was the selectors’ call between him and DK. He shouldn’t think too much about it,” added Gambhir.

The 38-year-old didn’t want to dwell too much on the pros and cons of having Karthik in the side now that he has been selected. But he feels Karthik being a consistent second-choice keeper in white ball cricket went in his favour apart from experience. (ALSO READ: India’s “strong” World Cup squad excites Shikhar Dhawan)

“Dinesh was a back-up keeper in white-ball cricket for a long time. Possibly he is being seen as a better keeper compared to Pant as (Chairman of selectors) MSK (Prasad) has said. He is also deemed a better finisher. Probably that’s how they think.

“But if you ask me, I had said my second keeper was Sanju Samson as I feel he is one of the best going around. He has the quality to be No 4. for a very long time,” said Gambhir.

“It’s up to the selectors…I mean whether to go with Rishabh Pant or experience of DK. Now we have to back whoever is going as it’s not important who has gone but focus should be on bringing the World Cup home.” (ALSO READ: I really wanted to be part of this team: Karthik on being part of World Cup squad)

The Indian team looks devoid of a Plan B in the current set-up but Gambhir believes that it is the duty of the captain and the coach to ensure that they have one.

“It’s up to the captain and coach to decide whether to have a Plan A, B or C or not. I am not in that situation, so I don’t know what plans they have in store.

“If they feel this is the best 15, then we must try and support them. Right now, it’s not about who’s going and not going, it’s about bringing back the World Cup,” he said. 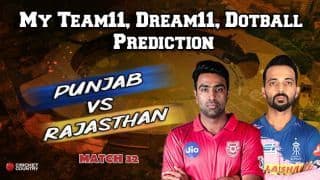 Today's Best Pick 11 for Dream11, My Team11 and Dotball - Here are the best pick for Today's match between KXIP and RR at Mohali Stadium 8pm