Current batting coach Sanjay Bangar is on a sticky wicket after having failed to provide the team with solutions in the middle-order in the past few seasons.

The battle for the post of India‘s next batting coach is set to heat up with former national selector Vikram Rathour throwing his hat into the ring.

It was felt that former India batsman Pravin Amre was the most suited candidate for the job as he has been associated with Delhi Capitals as batting coach in the past and is also known as Ajinkya Rahane’s personal coach. But it will no longer be a walk in the park for Amre.

Speaking to IANS, a senior BCCI functionary confirmed that Rathour has applied for the position. “Yes, he has thrown his hat into the ring and it definitely means that things will get interesting for the position of batting coach,” the functionary said.

ALSO READ: Pravin Amre in the hunt for India’s next batting coach

Current batting coach Sanjay Bangar is on a sticky wicket after having failed to provide the team with solutions in the middle-order in the past few seasons, and India’s exit in the semifinal of the World Cup has all but ended his tenure with the national team.

While he is still in the race and is an automatic applicant in the process of coach selection, it will be a surprise if he manages to retain his post.

Sources in the know of developments within the team have also spoken in hushed tones about how some of the batsmen have had to seek advice from former batting stars when they hit a rut.

“Without taking names, it is well documented that a couple of current team members have spoken about how they approached some of the former India batsmen to help them erase flaws in their batting when they were having issues scoring runs,” the source told IANS.

Amre, on the other hand, has been known to be a go-to-man for many a player. While Rahane is one of his more famous wards, the likes of Suresh Raina and Robin Uthappa have also worked with the former India batsman.

Raina had in fact spoken about how he turned to Amre when the short ball was troubling him around five seasons back. Uthappa too credited Amre for the turnaround in his fortunes.

As for Rathour, the former India opener was looking to coach the India ‘A’ and the U-19 teams in recent times, but the Committee of Administrators (CoA) refused to approve his appointment as there were issues of conflict of interest. But there should not be any conflict issue for the former selector when it comes to the national team role. 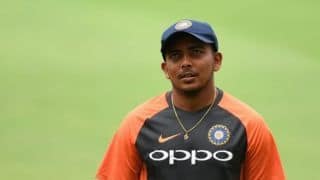