Australia's ODI captain stated that Maxwell did not have enough good scores to be considered a proper batsman in the top six.

Australia s ODI and T20I captain Aaron Finch has spelled out the road ahead for the struggling Glenn Maxwell, terming the explosive but out-of-form Victoria s role in the ODI team as an allrounder who will bat at No 7.

Maxwell, 30, finished the ODI series loss to South Africa with 61 runs, his best of 35 coming on Sunday in the visitor s series-clinching win. Since the start of 2017, Maxwell has three fifties in 17 ODI innings for an average of 28.17.

As the Australian selectors continue to search for a batting lineup capable of defending the title at the 2019 ICC Cricket World Cup in England, Finch stated that Maxwell did not have enough good scores to be considered a proper batsman in the top six.

“If you look at Glenn’s stats recently, he probably hasn’t made as many runs as he would have liked as a pure batsman,” he said after the loss in Hobart. “Therefore for him to be in the side and as an allrounder, he’s probably batting in that No.7 spot. ‘Maxi’ would have liked some more runs, and obviously wants to bat higher.

“But the reality is he’s in the side as a bit of an allrounder but he hasn’t scored as many runs that he needed to over the last little while in one-day cricket to probably justify taking up a top-four spot. That’s just reality at the end of the day.”Australia, who recently loss an unprecedented seven successive ODIs and on Sunday slumped to their 18th loss in 21 matches, have 13 more ODIs until the start of the 2019 World Cup.

Finch did not go so far as to say that Maxwell was in danger of missing out at the next summer s global extravaganza, but did caution that places were under scrutiny.

“It’s important we start to really nut down the balance of the side and get that right moving forward,” he said. “We’re all under pressure when we lose. No doubt about that. Between the batting line-up not having got it right for a little now while there’s going to be some questions asked whether it’s of Maxi, whether it’s (Chris) Lynn, (Travis) Head, myself, or ‘Stoin’ (Marcus Stones). There’s going to be questions asked of all of us.” 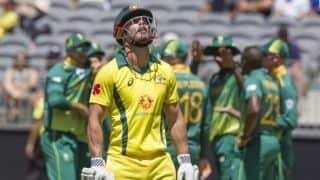 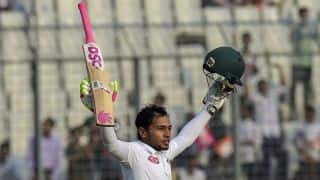