Kapil Dev has said the decision to not play Pakistan at the ICC World Cup 2019 should be left with the Indian government.

Legendary allrounder Kapil Dev has said the decision to not play Pakistan at the ICC World Cup 2019 should be left with the Indian government. (ALSO READ: Make it a cricket apartheid for Pakistan – Rai)

In the wake of the dastardly terrorist attack on Indian security forces in Pulwama, there have been growing demands of the country to not play Pakistan at the World Cup where the two teams are scheduled to face on June 16 in Manchester.

He added, “Whatever they [government] decide will be in the interest of the nation. We ll do what they want.”

On Friday BCCI shot a letter to ICC asking for robust security measures as it feared for the safety of players and match officials in the World Cup, as well as fans, and urged the ICC and England & Wales Cricket Board (ECB) to amp up security for the tournament.

The BCCI wishes to address concerns and sentiments that have emerged after the recent dastardly terrorist attack which was carried out on Indian soil by a terror outfit based out of Pakistan which resulted in the death of 44 Indian security personnel. In view of the aforesaid terrorist attack, BCCI fears for the safety and security of players and match officials participating in upcoming ICC events including the ICC Cricket World Cup 2019, the BCCI said in a statement. 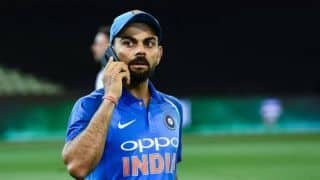