Considered an integral part of India's red-ball attack in Test cricket, Shami made headlines when he failed the Yo-Yo test at the National Cricket Academy ahead of the one-off Test against Afghanistan.

The last 12 months have been a rollercoaster ride for India pacer Mohammed Shami. From being dropped from the Test team for failing a fitness test in June 2018 to breaking into India’s squad for the upcoming World Cup on the basis of sheer performance, life has had its share of ups and downs for Shami. But the fast bowler doesn’t believe in complaining.

Considered an integral part of India’s red-ball attack in Test cricket, Shami made headlines when he failed the Yo-Yo test at the National Cricket Academy ahead of the one-off Test against Afghanistan.

However, the same bowler through his grit and determination forced the national selectors to bring him back into India’s ODI squad even as they tried other fast bowlers before handing Shami a comeback.

Life hasn’t been a bed of roses for Shami, but the fast bowler has not let anything come between him and his love for the gentleman’s game and that shows even in his performance for Kings XI Punjab (KXIP) in this edition of the Indian Premier League. (ALSO READ: Chargesheet filed against Mohammed Shami ahead of ICC World Cup 2019)

Speaking to IANS, Shami recounted the horror and also said that while everyone spoke about him failing the test, not many realised that he wasn’t even in the frame of mind to take the field at that point in time.

“I had some family problems at that point of time. The fitness test didn’t go well and I accept that I failed. But then, I wasn’t even in that frame of mind where I could focus on the match against Afghanistan. I wasn’t mentally prepared and had to undergo the Yo-Yo Test at that point in time and I flunked,” he explained.

Asked if that bothered him as people suddenly started talking about how it could be the start of the end of his international journey, Shami said he took it in his stride and realised that it was important to let his work do the talking rather than try and shut critics. (ALSO READ: I have focused on my line and length in the past 18 months: Mohammed Shami)

“Pressure was there, but I kept myself motivated and told myself that I have to work on my fitness and come back strongly. I have reduced 12-14 kilos since then and you can see that not just in my physical appearance, but it also reflects in the rhythm and momentum that I have found in my bowling,” he pointed.

Rhythm, he has definitely found in recent times and that was evident in not just his spells in this IPL — 19 wickets in 14 games — but also in the ODI series that he played against Australia and New Zealand in January and then the home series against the Aussies in March leading up to the T20 league.

For Shami, it was all about reminding people that his white-ball record is just as enviable as his red-ball performances. (ALSO READ: I am ready for the ICC World Cup 2019, will give my best: Mohammed Shami)

“I hadn’t been playing white-ball cricket for a while but in the series against Australia, I gained in confidence and just looked to keep that going even in the IPL. Also, playing consistently for KXIP also helped me. Getting to play day-in day-out helps you perform and get the right momentum.

“I was just waiting for an opportunity as I had a good record in white-ball cricket. Waited for almost two years and I had it in mind that when I did get the chance, I will show what I could do.

“Always knew that I can adapt to the shorter format and bowl the line and length required to succeed,” he revealed.

Asked if it was different to suddenly play under a bowler in R. Ashwin, Shami said that it was fun as Ashwin understood him well.

“It has been fun and different. A bowler understands the position of another bowler, while a captain who is a batsman thinks from the point of view of a batsman.

“Our understanding is good as we have played together for a long time and know each other’s strength and weaknesses. Also, I could go up to him and speak to him frankly about my thought process during a particular situation in the game,” he said. 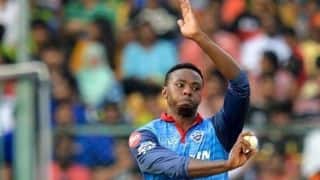