The past one year has been topsy-turvy for India pacer Mohammed Shami.

The past one year has been topsy-turvy for India pacer Mohammed Shami. After dealing domestic issues, he suffered a dip and form and fitness issues that kept him out of international duties. (READ: Jadhav, Dhoni steer India to 1-0 series lead)

Eventually, he worked his way back and since his return on the England tour, hasn’t looked back becoming India’s got-to bowler across formats.

Having impressed in Tests, Shami also forced his way back into the one-day squad and is now a certainty for the squad that will travel to England for the World Cup that gets underway on May 30.

In the series-opening first ODI against Australia in Hyderabad, the right-arm pacer was the pick of the Indian bowlers, finishing with figures of 2/44 in 10 overs that helped restrict the tourist for 236/7.

“In the past one year, I have seen lots of ups and down but cricket has brought me here. My aim is to give the best for the team. I keep on taking feedback from experienced players and I like [the process]. As far as bowling goes, I have focused more on my line and length in the last 18 months,” Shami said after the match.

Apart from his tight bowling, what has caught everyone’s attentions is Shami’s fitness. He looks leaner and fitter, a fact which he acknowledges.

“When I came back from injuries, my weight rose up to 93 kgs. It was then that I realised I needed to lose weight. I am thankful to everyone who helped me through this phase. I have maintained it ever since,” the 28-year-old said.

On the team’s performance, Shami said, “As a team, we have been working hard. We enjoy each other s company and our training sessions. The results are for everyone to see.” 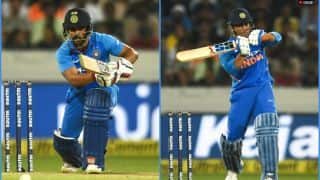