Hardik Pandya needs to focus on one aspect of his game: Shaun Pollock
By Indo-Asian News Service

Allrounder Hardik Pandya has gone from strength to strength before becoming a regular in the India Test cricket side but South African great Shaun Pollock wants the rising Baroda star to focus on one aspect of his game if he wants to be a long-term prospect.

Pollock said that the advent of T20 cricket has given rise to a number of allrounders in world cricket, even as he picked Englishman Ben Stokes as one of the best among the current crop.

Coming to Indian cricket, the former Proteas allrounder has advised the 24-year-old Hardik to settle down with one dimension of his game (be it batting or bowling), while contributing with the other.

“T20 cricket has made a lot of people realise that they can have the ability to contribute with both bat and ball. As far as all-rounders around the world are concerned, it’s difficult to pick one but I can think of Ben Stokes. He is one of the best,” the former South Africa said.

“Coming to Indian cricket, Pandya is probably a long term all-round option. I think Virat Kohli really likes his style and attitude towards the game. Looks like he can get both wickets and runs; of course time will tell everything.

“Hardik needs to settle down and choose one of the disciplines (batting or bowling), something that keeps him in the side, and look to contribute on the other as it can be very difficult to contribute with both.”

“If he settles down and gets a good run, there is no reason why he can’t become a wonderful all-rounder for India,” he added.

Pollock, who scored 3,519 runs and took 393 wickets in 303 One-day Internationals, also agreed with India’s batting maestro Sachin Tendulkar, who hit out at the International Cricket Council’s (ICC) decision of introducing two new balls in the 50-over format.

“It does take away the art of reverse swing. It also depends on what surfaces you play. In the subcontinent, the ball gets soft and it gets difficult to hit at the back end of the innings, which suits the bowling side,” he said.

“Spectators might enjoy the fact that the balls stay hard so that the batsmen can whack it out of the ground. During our playing days, we had to change the ball after the 34th over because it used to lose it’s colour, particularly on the abrasive subcontinent wickets,” he added.

Pollock urged the global governing body to stick to one ball, a move which could reduce the domination of batsmen in white ball cricket.

“If they could come up with a white ball that stayed white, that would be ideal. Stick with one and we could see reverse swing and the ball getting softer, giving the bowlers more of an option. But unfortunately we can’t, given the nature of the leather that goes brown,” he said.

“So ideally, I agree, I would like them to have just one ball, but I’m not sure whether it does or doesn’t work,” he added.

On being asked about another Proteas great Dale Steyn’s recent decision to quit limited overs cricket after the 2019 World Cup in England, but continue playing Tests, Pollock hoped that the right-armer’s injury woes are behind him now.

“Hope Dale goes from strength to strength. He has had injury problems and, in the later part of your career, you tend to pick more niggles than in your 20s,” he said.

“But the key that comes from his comment is mentally he is in a space where he wants to continue and just like AB de Villiers decided to stop mentally probably because he wanted to stop. Hopefully his injury problems are behind him,” hoped Pollock. 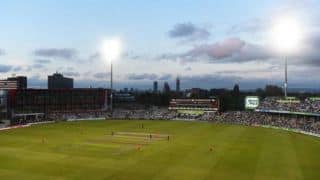