O'Keefe has taken 16 wickets in eight Sheffield Shield innings this season with an economy of 2.19.

He last played a Test match in 2017, but Stephen O’Keefe has been tipped by his state captain Peter Nevill to claim an Ashes spot this summer as Australia‘s second spinner.

“Absolutely, SOK’s record is second to none,” said Nevill. “He’s performed for such a long period of time for us, he ticked off 200 first-class wickets in the last game, took nine in match, and is one of the best spinners going around at the minute. Nathan Lyon is our No.1, there’s no doubt about that, but SOK is certainly putting his hand up for the No.2 spot.” (READ: Not fretting about Australia call key to O’Keefe’s BBL success)

In 2017, after being recalled to Australia s Test team, O Keefe claimed 6/35 against India in a famous overseas victory in Pune. O Keefe snared six wickets for five runs in 24 balls as India lost their last seven wickets for 11 runs in less than eight overs. O Keefe s figures in that spell read 4.1-1-5-6.

O’Keefe, capped nine times in Tests and seven in T20Is, has taken 16 wickets in eight Sheffield Shield innings this season with an economy of 2.19.

The 34-year-old is ostensibly behind fellow left-arm spinner Jon Holland who has 15 wickets in seven Shield innings, but was in Australia’s Test squad that toured the UAE in October and more recently part of the Australia A squad that played Sri Lanka in Hobart.

Asked about his own ambitions of returning to Australia’s Test squad for the Ashes, having made his debut in England four years ago, Nevill was realistic about the competition.

“I certainly set it out as a goal at the start of the year. But there’s people around the country who have been doing very well,” he said. “If I can finish the season really strongly, perhaps, who knows, and making runs at the right time helps. I’d love to be on that tour but at the moment I’ve got to focus on what’s right in front of me.” 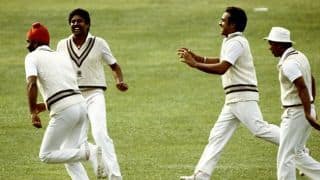