Table-toppers Hobart Hurricanes are unbeaten in six matches in Hobart this season.

The Hobart Hurricanes opener D’Arcy Short has dismissed talk of added pressure on him and his franchise ahead of the 2019 Big Bash League (BBL) semi-final at home, instead backing the table-toppers to extend their hot streak as the host Melbourne Stars at Bellerive Oval on Thursday.

Asked about Melbourne captain Glenn Maxwell‘s comment this week that the pressure was on Hurricanes, Short said it was just talk.

“It s just another game. I think they re just trying to play mind games. Obviously, we did finish on top and there s that pressure,” he told reporters on Wednesday. “But we ll just go about our plans and take that confidence into the game.” (READ: Maxwell, bowlers guide Stars to 94-run win over Sixers)

Short leads the BBL run table with 602 from 14 innings, striking at 139.35 and with six fifties, the joint most with his Hurricanes skipper Matthew Wade who is second with 590 runs at a strike-rate of 147.86.

Short’s 602 runs are the most for any batsman in a BBL season, and the 802 runs that he and Wade have added while opening the innings is the second-best for any pair in T20 cricket in a series or tournament (minimum 13 innings). (READ: Hurricanes seal top spot after win over Renegades)

Among the pair’s successful stands this season are 55 and 95 in the Hurricanes’ two victories over Melbourne.

“We click when we re out in the middle,” Short said of his combination with Wade, who this week was named men’s Domestic Player of the Year at the annual Australian Cricket Awards. “It just depends on who s feeling better on the day. Who goes hard first and gets the first couple away. It’s always hard to try and sit back but it s part of what you ve got to do sometimes.”

As for the semi-final clash with Melbourne, Short said: “They’re a dangerous side with (Marcus) Stoinis and Maxwell in there and, obviously, (Sandeep) Lamichhane coming back in. We’ve got that confidence and the ability to shut them down.” 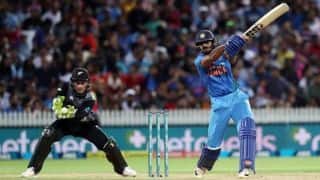