The bowlers did a remarkable job to set up RR s fifth win, from 12 games, of the season as the Jaipur-based franchise moved to the sixth spot with 10 points against their name.

While it still remains an uphill task, Rajasthan Royals (RR) have managed to keep their hopes to make it to the Indian Premier League (IPL) 2019 playoffs alive following a seven-wicket win over Kane Williamson-led Sunrisers Hyderabad (SRH) in the 45th match of the ongoing season at the Sawai Mansingh Stadium in Jaipur on Saturday.

The bowlers did a remarkable job to set up RR s fifth win, from 12 games, of the season as the Jaipur-based franchise moved to the sixth spot with 10 points against their name.

RR, who now have to play against Royal Challengers Bangalore (RCB) and Delhi Capitals (DC) away from home, will need to win both the games and then hope for some favourable results from the other games to reach the top four.

Earlier, after put in to bat, SRH squandered a chance to put up a big total on the board despite Manish Pandey’s 61 and David Warner’s 37 as the RR bowlers Jaydev Unadkat, Shreyas Gopal, Varun Aaron and Oshane Thomas came to the party and restricted SRH to 160/8, (IPL 2019, RR vs SRH: AS IT HAPPENED)

The RR batsmen – Liam Livingstone, Sanju Samson and Ajinkya Rahane – then made sure that they did not let the team down as the home team went on to win the match with five balls to spare to add two points to their account.

Chasing 161 runs to win, RR enjoyed a bright start as Liam Livingstone and Ajinkya Rahane put up 78-run opening stand before the former was dismissed for 44 by Rashid Khan. The Englishman scored those runs in 26 balls, hitting four fours and 3 sixes.

Although RR lost Livingstone, Rahane and Smith, Samson, who scored 48 off 32 balls, made sure that he stays till the end as RR won the match. 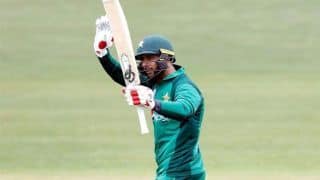