Steve Smith did not bat on day five of the second Ashes Test against England.

Australia’s Prime Minister Scott Morrison has slammed the jeering Lord’s crowd for booing Steve Smith when he got out on 92 on the fourth day’s play of the second Ashes Test, having returned to bat after being hit by a bouncer from Jofra Archer on his neck.

Archer tested Smith’s technique and patience during his fiery spell on Saturday, which included a number of bouncers. At first, the Australian batsman was hit on his elbow and a few overs later, Archer floored him with a bouncer.

After receiving medical attention, Smith decided to walk off the pitch. He passed the concussion test and in less than an hour, braved the odds and came out to bat again.

Smith soon got out to Chris Woakes on 92, falling short of his third consecutive century. On his way back to the pavilion, section of the Lord’s crowd booed Smith which did not not go well with Morrison.

“A draw for the second test but it was a total Ashes foul for the crowd at Lords to boo Steve Smith. His performance on the pitch during his return to Test Match cricket in the UK demands nothing other than respect,” Morrison wrote in his tweet.

A draw for the second test but it was a total Ashes foul for the crowd at Lords to boo Steve Smith. His performance on the pitch during his return to Test Match cricket in the UK demands nothing other than respect.

He’s a champion & has handled the events of the past year with a real humility. I’m extremely proud of Steve Smith, not just because he comes from the Shire. The crowd could learn a thing or two from Steve Smith.

I look forward to him answering his hecklers with bat & ball in hand to bring home the Ashes. pic.twitter.com/jgvshuaFsP

Smith failed the concussion test on the fifth morning and was subsequently replaced by Marnus Labuschagne, the first cricketer in the history of international cricket to become a like-for-like substitution for a concussed player.

The 25-year-old got a fiery welcome from Archer, who hit him with a bouncer right on his grille first ball that he faced. After initial checks, Labuschagne was cleared to resume his innings.

The batting allrounder deprived England of a win by batting out for more than 30 overs. Australia, chasing 267 from 50 overs, were three down for 47 in 14 overs. Labuschagne and vice-captain Travis Head put up 85 runs in next 22 overs, dragging a match to a draw. With dark clouds hovering over Lord’s, play was called off with just a couple of overs left on the final day. 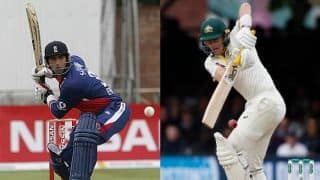