ICC has been coming up with interesting proposals to lift the game.

In a conscientious attempt to give context and relevance to the 50-over contests, the International Cricket Council (ICC) is said to be planning on creating a new One-Day International (ODI) league of the world’s top-13 cricket playing nations, starting 2019. The 13-team ODI league – believed to comprise the 10 Test playing nations along with Ireland, Afghanistan and Nepal – will see teams play each other over three years, with the top two nations playing a play-off series, constituting either three or five games, to determine the league champion. The said league could also incorporate the promotion/relegation system with the World Cricket League Championship, the second tier of one-day cricket, with the team finishing bottom of the ODI league at the end of the three-year cycle facing demotion to the lower division.  ALSO READ:League system for Test cricket could be in place by 2019: Dave Richardson

According to an ESPNCricinfo report on June 18, each team would play a three-match series against every other opposition, coming up to 36 ODIs per side over three years. The fourth year will be reserved for World Cup preparations. The three matches per series would be the minimum necessity in each country’s schedule, who will otherwise be free to organise additional ODIs which will not count towards the league. The standings in the league could then also be used to determine automatic qualification and seedings for the World Cup. ALSO READ: Favouritism by ICC or just exaggeration?

The ICC hopes that the league structure will add relevance to the ODI format, which has, outside the showpiece World Cup, been witness to a multitude of bilateral series devoid of context. This structure will also guarantee a set number matches for teams outside the ‘Big-9’ of ODI cricket – like Ireland and Afghanistan – providing them opportunities to develop their teams. The governing body too stands to gain should the proposal be implemented, possibly with increased broadcast revenue.

The proposal will be discussed at the ICC annual conference in Edinburgh at the end of the month. Voting on the proposal, however, could take place only during ICC’s board meeting in October, because of the dependency upon possible changes to ICC’s revenue model and the supposed abolition of ICC’s ‘Big Three’. 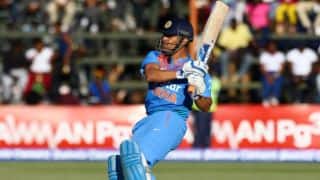